exatorrent is a Go library typically used in Data Processing, Stream Processing, Nodejs applications. exatorrent has no bugs, it has no vulnerabilities, it has a Strong Copyleft License and it has medium support. You can download it from GitHub.
Easy to Use Torrent Client. Can be hosted in Cloud. Files can be streamed in Browser/Media Player.
Support
Support
Quality
Quality
Security
Security
License
License
Reuse
Reuse

Single Executable File with No Dependencies

Download (or Build ) Single Executable Binary and run . That's it

Open and Stream Torrents in your Browser

Add Torrents by Magnet or by Infohash or Torrent File

Configurable via Config File but works fine with Zero Configuration

Retrieve or Stream Files via HTTP

How to do stream processing with Redpanda?

Redpanda seems easy to work with, but how would one process streams in real-time?

We have a few thousand IoT devices that send us data every second. We would like to get the running average of the data from the last hour for each of the devices. Can the built-in WebAssembly stuff be used for this, or do we need something like Materialize?

How to inject delay between the window and sink operator?

We have an Apache Flink application which processes events

Because we are using event time characteristics with 1 minute tumbling window all regions' sink emit their records nearly at the same time.

What we want to achieve is to add artificial delay between window and sink operators to postpone sink emition. 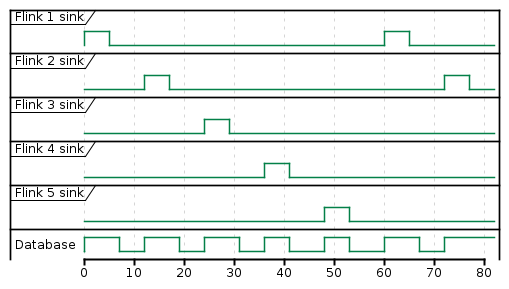 but it does not work reliably.

Why does my flink window trigger when I have set watermark to be a high number?

I would expect windows to trigger only after we wait until the maximum possible time as defined by the max lateness for watermark.

In this example, why would the window ever trigger in any meaningful amount of time? The window is a very large window and we wait a very long time for records. When I run my example, the window still gets triggered in under a minute. why is that?

Turns out the watermark was being generated after the source was exhausted(in this case it was from reading a file). So the max watermark was emitted(9223372036854775807). A trigger happens when: window.maxTimestamp() <= ctx.getCurrentWatermark()

Why does this explicit definition of a storm stream not work, while the implicit one does?

Given a simple Apache Storm Topology that makes use of the Stream API, there are two ways of initializing an Stream:

Result: This worked as expected, it only prints integers > 5.

Result: This did not work - all tuples were printed, including integers < 5.

Question: Why does this explicit declaration not work properly and how to fix that?

The topologies were ran on an local cluster where IntSpout is just an simple spout that emits random integers with the following commands:

That's because integerStream.filter(x -> x > 5); returns a new stream that you ignore.

There is also a syntax error in your first example. It has an extra semicolon at the end of the fourth line.

All filtering examples in apache flink documentation display simple cases of filtering according to a global threshold.

But what if filtering on an entry should take into account the previous entry?

Let's say we have a stream of sensor data. We need to discard the current sensor data entry if it's X% larger than then previous entry.

Is there a simple solution for this? Either in Apache Flink or in plain Java.

In flink, this can be done with state.

Your use case is very similar to the fraud detection example from flink doc.

How to expire keyed state with TTL in Apache Flink?

I want to expire keyed data with a TTL.

Some blog posts point that I need a ValueStateDescriptor for that. I made one like this:

But how do I actually apply this descriptor to my pipeline so it will actually do the TTL expiry?

The pipeline you've described doesn't use any keyed state that would benefit from setting state TTL. The only keyed state in your pipeline is the contents of the session windows, and that state is being purged as soon as possible -- as the sessions close. (Furthermore, since you are using a reduce function, that state consists of just one value per key.)

For the most part, expiring state is only relevant for state you explicitly create, in which case you will have ready access to the state descriptor and can configure it to use State TTL. Flink SQL does create state on your behalf that might not automatically expire, in which case you will need to use Idle State Retention Time to configure it. The CEP library also creates state on your behalf, and in this case you should ensure that your patterns either eventually match or timeout.

How to set the publish interval for topology metrics in Apache Storm?

While Apache Storm offers several metric types, I am interested in the Topology Metrics, (and not the Cluster Metrics or the Metrics v2. For these, a consumer has to be registered, for example as:

See also the docs. Unfortunately, these metrics seem to have a fixed reporting interval of 60s. For the Cluster Metrics, an interval can be configured, but I can`t find an option for the Topology metrics, even when looking in the source corde of storm.

So: How to configure the reporting rate for Storms Topology Metrics?

After looking at the right place, I found the related configuration: topology.builtin.metrics.bucket.size.secs: 10 is they way to specify that interval in storm.yaml.

How to force Apache Flink using a modified operator placement?

Apache Flink is distributes its operators on available, free slots on the JobManagers (Slaves). As stated in the documentation, there is the possibility to set the SlotSharingGroup for every operator contained in an execution. This means, that two operators can share the same slot, where they are executed later.

Unfortunately, this option only allows to share the same group but not to assign a streaming operation to a specific slot.

So my question is: What would be the best (or at least one) way to manually assign streaming operators to specific slots/workers in Apache Flink?

You could disable the chaining via (disableChaining()) and start a new chain to isolate it from others via (startNewChain()). You can play with Flink Plan Visualizer to see if your plan has isolated operators. These modifiers applied affter the operator. Example:

Why do you need to isolate it? Well... at the end of any chain flink does a checkpoint (if enabled) and checkpoint should be confirmed (persisted/serialized). Otherwise the system will rollback it and start the process again. For this Flink needs to be sure that it has enough slots beforehand. In your case enough exceptional slots. And if not, the whole stream will be inactive. Therefore you can NOT tell flink that for operator x you need to use only slot X and for operator Z only Y as for Flink is just a computer power which produces intermediate results for the checkpoint (or directly to the next operator).

To understand what is kafka-streams I should know what is stream-processing. When I start reading about them online I am not able to grasp an overall picture, because it is a never ending tree of links to new concepts.
Can any one explain what is stream-processing with a simple real-world example?
And how to relate it to kafka-streams with producer consumer architecture?

Stream Processing is based on the fundamental concept of unbounded streams of events (in contrast to static sets of bounded data as we typically find in relational databases).

Let's imagine we want to take this unbounded stream of events, perhaps its manufacturing events from a factory about 'widgets' being manufactured.

We want to filter that stream based on a characteristic of the 'widget', and if it's red route it to another stream. Maybe that stream we'll use for reporting, or driving another application that needs to respond to only red widgets events:

As you mentioned, there are a large number of articles about this; without wanting to give you yet another link to follow, I would recommend this one.

In the context of the above example it looks like this:

Kafka Streams is built on top of the Kafka producer/consumer API, and abstracts away some of the low-level complexities. You can learn more about it in the documentation.

How do I handle out-of-order events with Apache flink?

To test out stream processing and Flink, I have given myself a seemingly simple problem. My Data stream consists of x and y coordinates for a particle along with time t at which the position was recorded. My objective is to annotate this data with velocity of the particular particle. So the stream might look some thing like this.

For simplicity, it can be assumed that any late data will arrive within 100ms of the early data.

I will admit that I am new to stream processing and Flink, so this might be a stupid question to ask with an obvious answer, but I am currently stumped as to how to go about achieving my objective here.

One way of doing this in Flink might be to use a KeyedProcessFunction, i.e. a function that can:

You'll find an example in the official Flink training that is using this kind of logic for the duration of taxi rides, which has lot's of similarities with your use case. Have also a look at the various Readme.md files of that repo for more details.

You are welcome to contribute. You can contribute code,documentation,icon or anything that you think benefits the project. If you want to implement any significant feature, please discuss it first.