hntoplinks is a Java library typically used in Messaging, Email applications. hntoplinks has no vulnerabilities and it has low support. However hntoplinks has 63 bugs and it build file is not available. You can download it from GitHub.
Aggregate daily, weekly, monthly, yearly and all time top links from Hacker News (http://news.ycombinator.com) It does a similar job as https://news.ycombinator.com/best Application is hosted at <a href=http://www.hntoplinks.com">http://www.hntoplinks.com It is also possible to subscribe daily, weekly, monthly, annually top links mail lists. Please go here for email subscription. See following list for all alternative Hacker News reading applications.
Support
Support
Quality
Quality
Security
Security
License
License
Reuse
Reuse

kandi has reviewed hntoplinks and discovered the below as its top functions. This is intended to give you an instant insight into hntoplinks implemented functionality, and help decide if they suit your requirements.

No Code Snippets are available at this moment for hntoplinks.

What is the simplest vertical spacer in Outlook (HTML email)?

What is the simplest vertical spacer in Outlook (and supported everywhere else)?

I have two elements, one on top of the other, both with display:block. I would like to space them without wrapping either in a table. I want a spacer that I can reuse anywhere with only simple adjustments to its height. I need to be able to set it to specific pixel heights. I also need to be able to override the height with a media query to make it responsive.

Part of the goal is to avoid splitting things up into table cells every time we need vertical gaps, since that tends to add other complexities even aside from code bloat (bad for email).

For a application specific spacer you could use:

Outlook is quite respectful of common css styling so you could simply use height attribute on any element or class I use the pre tag in this example:

I would avoid using margin and padding as its very sporadic across different email clients.

But the most compatible way I've found to maintain spacing across all email clients is sadly still with tables.

So my current code is this in PHP:

This code allows PHP to see my email inbox using IMAP and it works fine.

Now my question is, how to make it so that It checks all the new emails in my inbox and outputs "n New Emails!" and marks each of them as seen automatically.

I would really appreciate It If someone were to shed some light on this as I am very new to IMAP and handling emails programmatically in general.

I have an smtplib function that loops through 2 excel files and then opens them and adds them as an attachment. Right now the have generic names, but I thought it would be pretty cool to grab info from the data and use it as the name of the document. For example I wanted to grab their location based on a "Location" column found in a dataframe if Ive filtered by the user.

Here's my code so far:

normally if it was a single file, I could just change the name by using the "filename" method, but I'm not sure how to do it for more than 1 file.

You could create a dictionary using the zip function and reference the old name as a key to pass the new desired name to the filename parameter.

this is to send mail

here is the error

Honestly, I think I have a fundamental gap in understanding how SMTP works. I can't seem to find a good explanation of what is happening behind the scenes and I think this is preventing me from being able to do what I am attempting to do.

To explain, I'm trying to setup an application which sends notifications to users by connecting to an SMTP server. Fair enough. I figure, since I'm using my own domain, I have SPF/DKIM/DMARC configured, I can add an MX record for the host I set the application up on (my SPF record has the mx keyword to authorize any hosts in my MX records to send/receive mails). Then, I can have that same host run a super lightweight SMTP server that can accept mails from the application, and send them on to recipients.

Almost crucially, I want this server to basically just run on localhost so that only this application can connect and send mails through it, but so that it can't really "receive" mails sent to my domain (I have set the MX priority very low (well, a high number) for this app server). I figure since I'm running my own SMTP server, that I don't really need to authenticate against it (it's running on localhost), just take in any mail and send it on to recipient domains.

When sending on to recipient domains... does the SMTP server need to authenticate to say, the gmail SMTP server as a user in order to send mails over there? That seems weird, since it's not a user logging into gmail to send mails, it's an SMTP server that is authorized within SPF sending mail from my domain (From address from my domain as well) to where ever the app server user's email is based (in this example, the user would be e.g., some_user@gmail.com).

Exact repro steps, where example.com is my domain, and terminals are running on a box with a hostname listed in my MX records.

How do SMTP servers normally send mail between each other? Do they each get some login to each other's SMTP servers to authenticate with, and since I'm not doing that, this is a problem? Can I run a SMTP server on localhost and have it send mail out of the network without receiving mails (a no-reply service)? Is there something obvious that I'm just missing here that solves all my problems?

aiosmtpd is not an MTA or an email relay out of the box - it is merely an SMTP server that will receive messages and do whatever with the messages you program it to do. By default it will do nothing - that is, it will receive the messages and throw them away. If you want to implement an email relay in aiosmtpd, then you need to implement the SMTP client portion of the MTA, e.g. by implementing an aiosmtpd handler that instantiates smtplib.SMTP to connect to remote hosts.

However, if all you want is an email relay, then you most likely don't need aiosmtpd at all - postfix is probably a better choice.

aiosmtpd can be a good choice if you need to implement mailing list software or perform some automation tasks based on incoming emails from e.g. cameras or scanners.

If you want to implement an email relay in aiosmtpd, then you need to ensure that both the software and your server are configured in a way that you don't relay unauthenticated messages from the outside internet.

See also: Python aiosmtpd - what is missing for an Mail-Transfer-Agent (MTA)?

Select multiple replace one word with every value in an array

This is the HTML Select Code I made sure to add [] to make the name into an array.

This is the php code, I've been successful in replacing the other individual values but when I try to replace one with multiple values it only shows one value. I tried a foreach loop but this only works when I echo the value $product. I want to string all the items selected not just one, I have an example of what I want it to look like below.

This is the html template code

This is the result I'm getting

When you do this:

You are actually doing the replace n times, but only the first one will work, because afterwards there is no more "{{list}}" to be replaced. That is not an error, just not what you expect.

Now you are building a temporary String variable with all selected products and then you only replace it once.

TypeError: e.preventDefault is not a function on React Hook Form using EmailJs

I got an error once the form is submitted:
TypeError: e.preventDefault is not a function.

Here is my code:

I saw the react hook form samples, but I'm not sure if i missed something on passing the data to the form.

You can check it here: https://codesandbox.io/s/react-hook-form-using-emailjs-2k6x5

The handleSubmit function calls your sendEmail with two parameters. The first one is the form data and the second one is the event.

This should solve your issue :

I have this setup, however, I get the following

The user is being created and the email is being sent, however, I'm not sure why I'm getting this error.

As mentioned before the user is being created and the email is being sent, but not sure why I'm getting the ERR_HEADERS error.

In the try-catch block, you send a response res.send({ user: user._id }) without stopping the function. The function continues to execute and you try to send another response res.status(200).json({ status: 'OK' });

I'd recommend changing the try-catch block to this:

This will stop the execution if there is an error (the return statement), but will continue if user.save() successfully finished. Finally, it will return the 200 {status: OK} response at the end.

I am trying to send an email with CC & BCC. Emails are not delivered to CC & BCC addresses. But CC addresses are displayed to the recipient's details. A snapshot is given below. 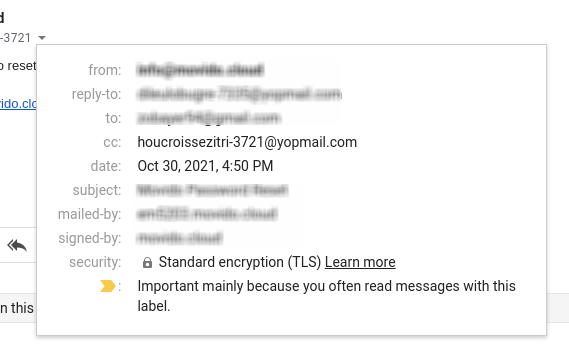 I am using golang net/smtp with SendGrid. My code sample is given below.

Please help me. Advance thanks :)

Under the covers, smtp.SendMail calls smtp.Client.Rcpt for each to recipient. The to slice directs who will actually receive the email. The addressees in the body of the email is purely informational - in fact they don't even need to match the real addressee info.

So to fix your addressing issue, you need to collect all to, cc & bcc addressees:

also since every recipient receives the body of the e-mail, bcc users should not be listed in the body, for obvious privacy reasons.

I have been searching a lot for an answer, but I did not find my mistake yet. So maybe you can help me with this error I get when trying to send a mail from an unknown mail via nodemailer to my personal mail (for a contact form on my website):

I have worked with nodemailer before, but back then I was sending mails from my mail to another person, not the other way around. In my research I found this tutorial - Creating A Contact Form With JavaScript / Nodemailer. What am I doing different? Seems like it should be working either way...

Okay I found the solution, for anyone with the same issue: In fact, Nodemailer can not send mails from another person´s e-mail. So I changed my message options to the following:

Basically I send the mail from my mail to the same mail. To keep the person´s mail for replies I added the replyTo option. Now it works like a charm!

You can download it from GitHub.
You can use hntoplinks like any standard Java library. Please include the the jar files in your classpath. You can also use any IDE and you can run and debug the hntoplinks component as you would do with any other Java program. Best practice is to use a build tool that supports dependency management such as Maven or Gradle. For Maven installation, please refer maven.apache.org. For Gradle installation, please refer gradle.org .