antiquity is a Java library typically used in User Interface, Neo4j applications. antiquity has no bugs, it has no vulnerabilities, it has build file available, it has a Strong Copyleft License and it has low support. You can download it from GitHub.
Antiquity - A versioned graph. Antiquity is a [Blueprints](http://blueprints.tinkerpop.com) extension that enhances any Blueprints graph with full versioning and history support, This can work with any underline graph DB that Blueprints supports such as Neo4j, OrientDB, Titan, etc…​.
Support
Support
Quality
Quality
Security
Security
License
License
Reuse
Reuse

kandi has reviewed antiquity and discovered the below as its top functions. This is intended to give you an instant insight into antiquity implemented functionality, and help decide if they suit your requirements.

Text classification from html with BeautifulSoup

Text classification from html with BeautifulSoup

I have obtained html page source code and then parsed it using 'html5lib' with BeautifulSoup.

I've tried using .href method similar to .text method but when i am using .href 'None' is being returned. Could you tell me how to extract those two velues from href body?

Running .text method on the html code returning output like this:

According to your question, I use split() method to get the desired output.

But when I plot the data in plotly using the built-in animation_groups and animation_frames the slider bar jumps from row to row by nature, which doesn't lead to an intuitive animation when each 'jump' is not the same amount of days.

What I'm trying to work-around and do is create a new table, which duplicates rows and keeps the true report data, but creates an additional 'animation date' to keep the slider bar transition intuitive. I'd like the new data table to look something like the below. Assume the date the code was ran was 8/6/2021.

If there is any easier way to work around this in plotly, please let me know! Otherwise, I'm having trouble getting off the ground with the logic creating a new DataFrame while iterating through the old DataFrame.

IIUC you can reindex through pd.MultiIndex.from_tuples:

I'm working with a dataset that has 'date', 'id' and 'antiquity'. For the same product the antiquity is the same all the time, even if the date changes:

I created a def that makes this operation:

I call this function using a single line (just to test the function):

When I execute it, it returns to me a "SettingWithCopyWarning" but it doesn't work, the dataframe value isn't updated. I thought to do a loop for each id and call this function.

How can i do this operation? Is there any way to use any pandas function like apply() or something?

Would it work to add row number within each id group to antiquity column with cumcount?

P.S. Dataset must be sorted by date for this to work, of course. If it's not, start with

P.P.S. If for some reason you want to do it with a function instead (which is slower, so generally not recommended), the problem with your code is that you're setting new values on a copy of the dataframe (df[...][...] returns a copy). The fix is to use loc:

I am trying to save multiple images but I get the error show in the image at the bottom of the post.

I have tried doing a request of the name, but I get another error, I have a one to many relationship between property and images, I am trying to save many images of a property.

If I am receiving the image, if I make a dd before the creation I receive the image. 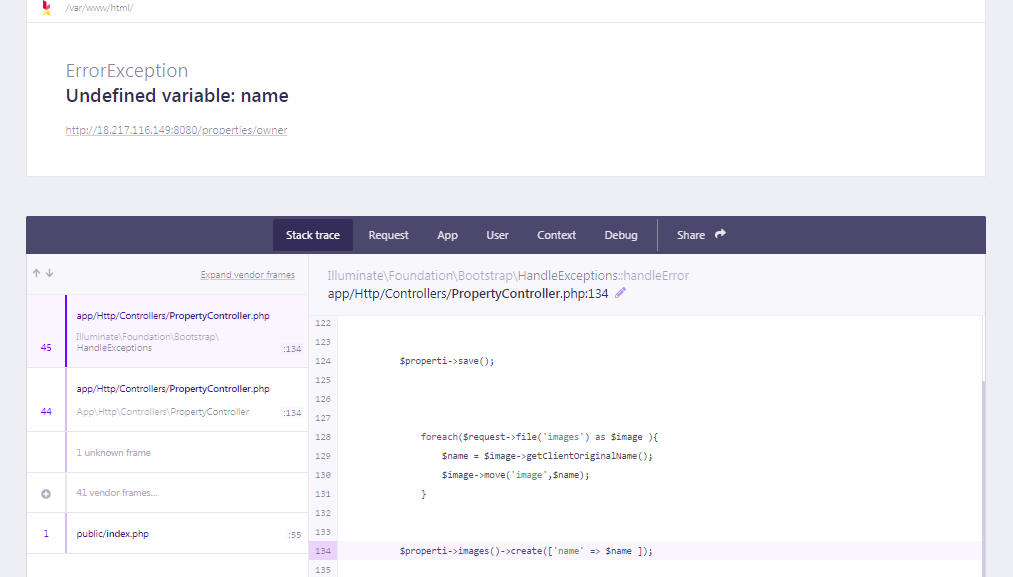 as i see, you are calling a variable $name defined inside a foreach loop which mean it's not defined outside the loop, and that's what the error said.

I'm trying to save multiple images of my property, a property can have several images, but I get this error

This is assigning an array to images:

You are then calling $properti->save() which is trying to save that array, which it can't; it will try to convert it to a string, which it can't. So you can comment/remove this line.

If you want to save these via the relationship you can try something like this:

I just built my first AWS Apache Server and uploaded my website from my school project. The site works in Dreamweaver. However on my Apache server only some of the images appear. They all have the same path and are contained in the same folder /var/www/html/images. Some appear as intended, others are a broken link. Any ideas why it's not working? To get css to load I had to move my css folder. With the images some work fine while others do not. They are roughly the same size files. This is the code for one of the non working images:

Here is the whole page:

I found that the file extension on some of the pictures was capitalized. These pictures wouldn't load until I changed .JPG to .jpg.

You can download it from GitHub.
You can use antiquity like any standard Java library. Please include the the jar files in your classpath. You can also use any IDE and you can run and debug the antiquity component as you would do with any other Java program. Best practice is to use a build tool that supports dependency management such as Maven or Gradle. For Maven installation, please refer maven.apache.org. For Gradle installation, please refer gradle.org .