elasticsearch-skroutz-greekstemmer is a Java library typically used in Artificial Intelligence, Natural Language Processing applications. elasticsearch-skroutz-greekstemmer has no bugs, it has no vulnerabilities, it has build file available and it has low support. You can download it from GitHub, Maven.
This plugin is based on the GreekStemmer that is included in Apache Lucene. Lucene’s GreekStemmer is created according to Development of a Stemmer for the Greek Language of Georgios Ntaias. This thesis mentions that 166 suffixes are recognized in the Greek language. However, only 158 were captured by this stemmer, because the addition of the remainning suffixes would reduce the precision of the stemmer on the word-sets that were used for its evaluation.
Support
Support
Quality
Quality
Security
Security
License
License
Reuse
Reuse

number of matches for keywords in specified categories

As a simplified example, given the two data frames below, i want to count how many of each animal type appear in the text cell.

So my desired result would be:

Is there a straightforward way to achieve this keyword-matching-and-counting that would be applicable to a much larger dataset?

Here's a way do to it in the tidyverse. First look at whether strings in df_texts$text contain animals, then count them and sum by text and type.

What am I doing wrong? Is it a grammar issue?

I have the following four strings, and I want to extract each word's "stem form."

The issue is with the words accreditation and accredited.

The word accreditation never returned the stem. And accredited returns different results based on the words' order in the string, as shown in Text 1 and Text 2 in the attached image. 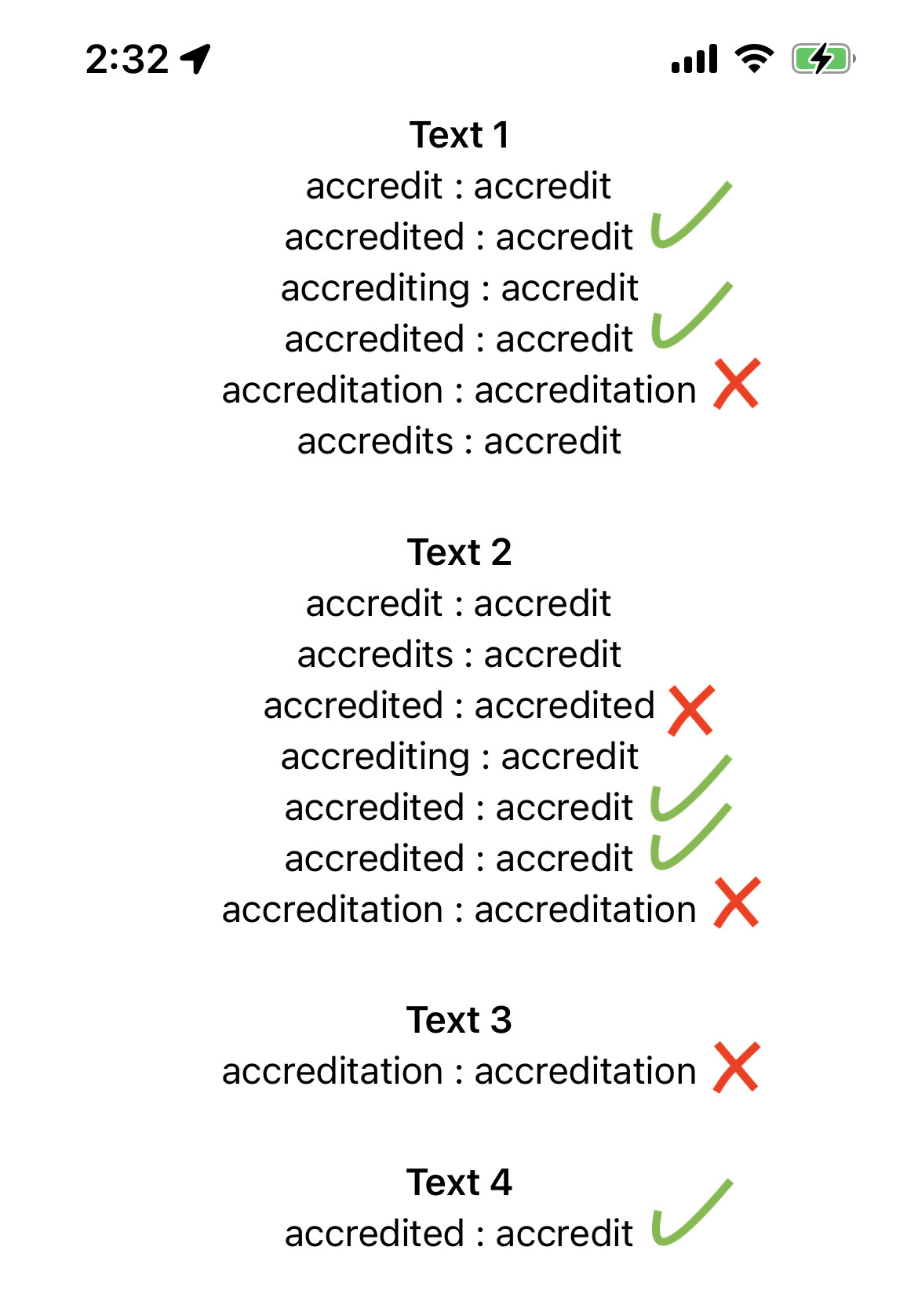 And here is the full code in SwiftUI:

Thanks for your help!

As for why the tagger doesn't find "accredit" from "accreditation", this is because the scheme .lemma finds the lemma of words, not actually the stems. See the difference between stem and lemma on Wikipedia.

The stem is the part of the word that never changes even when morphologically inflected; a lemma is the base form of the word. For example, from "produced", the lemma is "produce", but the stem is "produc-". This is because there are words such as production and producing In linguistic analysis, the stem is defined more generally as the analyzed base form from which all inflected forms can be formed.

The documentation uses the word "stem", but I do think that the lemma is what is intended here, and getting "accreditation" is the expected behaviour. See the Usage section of the Wikipedia article for "Word stem" for more info. The lemma is the dictionary form of a word, and "accreditation" has a dictionary entry, whereas something like "accredited" doesn't. Whatever you call these things, the point is that there are two distinct concepts, and the tagger gets you one of them, but you are expecting the other one.

As for why the order of the words matters, this is because the tagger tries to analyse your words as "natural language", rather than each one individually. Naturally, word order matters. If you use .lexicalClass, you'll see that it thinks the third word in text2 is an adjective, which explains why it doesn't think its dictionary form is "accredit", because adjectives don't conjugate like that. Note that accredited is an adjective in the dictionary. So "is it a grammar issue?" Exactly.

I am trying to clean up text using a pre-processing function. I want to remove all non-alpha characters such as punctuation and digits, but I would like to retain compound words that use a dash without splitting them (e.g. pre-tender, pre-construction).

For instance, the original text:

should be split into

Any help would be appreciated!

To remove all non-alpha characters but - between letters, you can use

Looping over a list of bigrams to search for, I need to create a boolean field for each bigram according to whether or not it is present in a tokenized pandas series. And I'd appreciate an upvote if you think this is a good question!

Failed: Could not adapt the approach here -> Match trigrams, bigrams, and unigrams to a text; if unigram or bigram a substring of already matched trigram, pass; python

Failed: Could not get this one to adapt, either -> Compare two bigrams lists and return the matching bigram

Failed: This method is very close, but couldn't adapt it to bigrams -> Create new boolean fields based on specific terms appearing in a tokenized pandas dataframe

Thanks for any help you can provide!

You could use a regex and extractall:

I would recommend to downgrade your milvus version to a version before the 2.0 release just a week ago. Here is a discussion on that topic: https://github.com/deepset-ai/haystack/issues/2081

Which model/technique to use for specific sentence extraction?

I have a dataset of tens of thousands of dialogues / conversations between a customer and customer support. These dialogues, which could be forum posts, or long-winded email conversations, have been hand-annotated to highlight the sentence containing the customers problem. For example:

Dear agent, I am writing to you because I have a very annoying problem with my washing machine. I bought it three weeks ago and was very happy with it. However, this morning the door does not lock properly. Please help

The highlighted sentence would be:

However, this morning the door does not lock properly.

I found a model on HuggingFace which has been pre-trained with customer dialogues, and have read the research paper, so I was considering fine-tuning this as a starting point, but I only have experience with text (multiclass/multilabel) classification when it comes to transformers.

This type of problem where you want to extract the customer problem from the original text is called Extractive Summarization and this type of task is solved by Sequence2Sequence models.

The main reason for this type of model being called Sequence2Sequence is because the input and the output of this model would both be text.

I recommend you to use a transformers model called Pegasus which has been pre-trained to predict a masked text, but its main application is to be fine-tuned for text summarization (extractive or abstractive).

This Pegasus model is listed on Transformers library, which provides you with a simple but powerful way of fine-tuning transformers with custom datasets. I think this notebook will be extremely useful as guidance and for understanding how to fine-tune this Pegasus model.

My current data-frame is:

I want a data-frame similar to the following, where a column is added based on whether a Trump token, 'Trump, Donald J' is mentioned in the keywords and if so then it is assigned True :

I have tried multiple ways using df functions. But cannot achieve my wanted results. Some of the ways I've tried are:

How to calculate perplexity of a sentence using huggingface masked language models?

I have several masked language models (mainly Bert, Roberta, Albert, Electra). I also have a dataset of sentences. How can I get the perplexity of each sentence?

From the huggingface documentation here they mentioned that perplexity "is not well defined for masked language models like BERT", though I still see people somehow calculate it.

However, when I try to use the code I get TypeError: forward() got an unexpected keyword argument 'masked_lm_labels'.

I tried it with a couple of my models:

This SO question also used the masked_lm_labels as an input and it seemed to work somehow.

There is a paper Masked Language Model Scoring that explores pseudo-perplexity from masked language models and shows that pseudo-perplexity, while not being theoretically well justified, still performs well for comparing "naturalness" of texts.

As for the code, your snippet is perfectly correct but for one detail: in recent implementations of Huggingface BERT, masked_lm_labels are renamed to simply labels, to make interfaces of various models more compatible. I have also replaced the hard-coded 103 with the generic tokenizer.mask_token_id. So the snippet below should work:

You can try this code in Google Colab by running this gist.

Mapping values from a dictionary's list to a string in Python

I am working on some sentence formation like this:

I would now need all possible combinations to form this sentence from the dictionary, like:

The above use case was relatively simple, and it was done with the following code

But can we also make this scale up for longer sentences?

I tried to use https://www.pythonpool.com/python-permutations/ , but the sentence are all are mixed up - but how can we make a few words fixed, like in this example the words "and is from" is fixed

Essentially if any key in the dictionary is equal to the word in the string, then the word should be replaced by the list of values from the dictionary.

Any thoughts would be really helpful.

You can first replace the dictionary keys in sentence to {} so that you can easily format a string in loop. Then you can use itertools.product to create the Cartesian product of dictionary.values(), so you can simply loop over it to create your desired sentences.

Note that this works for Python >3.6 because it assumes the dictionary insertion order is maintained. For older Python, must use collections.OrderedDict rather than dict.

We can create a model from AutoModel(TFAutoModel) function:

As I know, both models use distilbert-base-uncase library to create models. From name of methods, the second class( AutoModelForSequenceClassification ) is created for Sequence Classification.

But what are really differences in 2 classes? And how to use them correctly?

(I searched in huggingface but it is not clear)