pipenv is a Python library typically used in Utilities, Build Tool applications. pipenv has no bugs, it has no vulnerabilities, it has build file available, it has a Permissive License and it has high support. You can install using 'pip install pipenv' or download it from GitHub, PyPI.
Python Development Workflow for Humans.
Support
Support
Quality
Quality
Security
Security
License
License
Reuse
Reuse

kandi has reviewed pipenv and discovered the below as its top functions. This is intended to give you an instant insight into pipenv implemented functionality, and help decide if they suit your requirements.

I triyed to execute pipenv shell in a new environtment and I got the following error:

I tried to remove pipenv, install python with pienv create an alias to python, but anything works.

Any idea, I got the same error in existing environment, I tried to remove all environments folder but nothing.

By github issue, the solution that works was the following:

JupyterHub has various authentication methods, and the one I am using is the PAMAuthenticator, which basically means you log into the JupyterHub with your Linux userid and password.

However, environment variables that I create, like this (or for that matter in those set in my .bashrc), before running JupyterHub, do not get set within the user's JupyterLab session. As you can see they're available in the console, with or without the pipenv, and within python itself via os.getenv().

However in JupyterHub's spawned JupyterLab for my user (me):

This environment variable myname is not available even if I export it in a bash session from within JupyterLab as follows:

Now the documentation says I can customize user environments using a Docker container for each user, but this seems unnecessarily heavyweight. Is there an easier way of doing this?

If not, what is the easiest way to do this via Docker?

In the jupyterhub_config.py file, you may want to add the environment variables which you need using the c.Spawner.env_keep variable

Additional information on all the different configurations are available at https://jupyterhub.readthedocs.io/en/stable/reference/config-reference.html

Celery + FastAPI on docker, the app container does not sync with Celery thus I can't use it

So I'm building a webapp using FastAPI. I use Celery to run some background tasks. My code works fine on my local development machine, but when I try to dockerize it, it seems the FastAPI app running on a container, can't sync with celery. For instance I have 4 containers: 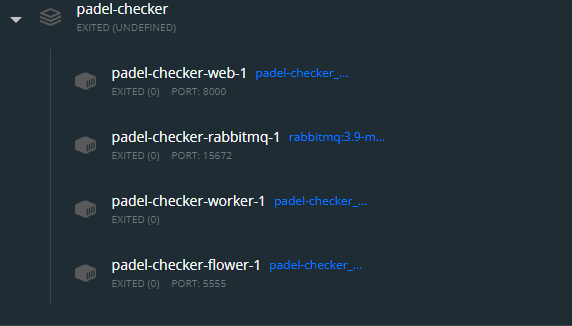 If I start the webapp locally on my computer, and don't start the padel-checker-web-1 container and only use the other 3, celery on docker syncs with it and works.

My problem is having the webapp running inside docker and using celery, they just don't sync.

I'm pasting my docker-compose.yml to see if someone can point me in the right direction:

If I try to use the container, calling any task.delay() it just hangs.

I've fixed my docker-compose.yml, I guess it was the depends_on:

To have firebase working with python code, as guided officially from firebase homepage here, I use python-firebase library as listed there.

Install it by running pipenv install python-firebase, my code resulted with below error.

The solution for that is to install the latest version of python-firebase, as discussed here, but thru the pip directly not pipenv

I tried that with pipenv inplaceof pip, but didn't work

So my question is what to put into Pipfile so that we can get firebase ready-to-serve in our python code by simple install command pipenv install ?

According to the doc here from pipenv

So you could try

as the recommendation you have linked suggested. Notice #egg=python-firebase is appended since pipenv requires an #egg fragment for version controlled dependencies.

To answer your question, the following is the Pipfile generated by pipenv, although you should rely on pipenv to generate this file for you.

I have Dockerfile based on Alpine linux that builds lambda.zip file for AWS Lambda. Here's Dockerfile:

On AWS lambda and on my local machine I am getting same error with geos_c After:

If I unzip file, I got something like these:

I tried a lot of different solutions on Internet so you can see a mess in my Dockerfile, but they didn't work.

Luckily there are two alternatives now that make this much easier:

Lambda Layers are Lambda dependencies that can be packaged up in a reusable method, that can also be shared with other developers. In this case someone has already created a shapely Lambda Layer (and someone else here) that you can simply include in your Lambda function instead of trying to package it yourself.

If you still want to build it yourself you could look at that project's source code to see how they are building the layer.

Instead of creating a zip deployment, you could create a Docker image and deploy it to Lambda. You do have to implement a specific interface inside your Lambda container if you go this route, and it is easiest to do this by starting with one of the official AWS Lambda base images.

I'm having issues testing my package with pytest and tox. When attempting to run both I receive ModuleNotFoundError. Pytest does find test_hello.py but fails immediate on trying to import my package for the test.

I am using PyCharm IDE which automatically sets up a pipenv environment for my project. I am using the terminal shell (Powershell instance) within PyCharm to run pytest / tox / pip commands.

You don't show us your setup.py, but as you use a src directory structure, you most likely miss the following arguments when calling setup:

Is there a simple or elegant way to uninstall django-rest-swagger on Windows 10? I've recently started developing API's and creating documentation. I found a tutorial that used the django-rest-swagger app. After installing the app and doing more reading, I discovered that it was deprecated, and the developer's GitHub page recommends using drf-yasg.

Eventually, I gave up, and decided to do it the hard way. I manually deleted all the installed files. Fortunately, I hadn't updated my requirements.txt, so, I knew what was originally installed. While this solution worked, it was somewhat time consuming.

Does django-rest-swagger have an internal uninstall command? And does anyone know why "pip uninstall" didn't remove the app folders?

Then go to settings.py and remove or comment the following line:

And finally remove or comment in views.py the import and code related with swagger library:

eb : The term 'eb' is not recognized as the name of a cmdlet, function, script file, or operable program

Everything works up till this point:

When I run that line of code I get this error:

What could be some causes of this? Here's my django.config:

You have to install awsebcli to be able to use the eb CLI command.

Pipenv allows the use of the system Python instead of creating a virtualenv to install packages:

But if I do so, subsequent pipenv runs are trying to create the virtualenv instead of using the system Python. In particular, I'm interested in using Pipenv scripts:

Is there a way to use the system Python interpreter for Pipenv scripts?

When setting up your pipenv you can specify the version of Python by using: pipenv --python 3.6, to use Python3.6.

to the specific version of Python you want.

If you did all of this and are still having trouble with accessing the correct version of Python from within pipenv shell then you might want to check your .bashrc file to be sure that you don't have an alias for a specific version of Python.

How to specify a pip version in pipenv

Creating a new pipenv from the locked file does not use the required pip version.

A workaround we did was to install the right pip version after the pipenv environment is created:

You can install using 'pip install pipenv' or download it from GitHub, PyPI.
You can use pipenv like any standard Python library. You will need to make sure that you have a development environment consisting of a Python distribution including header files, a compiler, pip, and git installed. Make sure that your pip, setuptools, and wheel are up to date. When using pip it is generally recommended to install packages in a virtual environment to avoid changes to the system.