opentsdb is a Java library typically used in Database applications. opentsdb has no vulnerabilities, it has a Weak Copyleft License and it has high support. However opentsdb has 85 bugs and it build file is not available. You can download it from GitHub, Maven.
OpenTSDB is a distributed, scalable Time Series Database (TSDB) written on top of HBase. OpenTSDB was written to address a common need: store, index and serve metrics collected from computer systems (network gear, operating systems, applications) at a large scale, and make this data easily accessible and graphable. Thanks to HBase's scalability, OpenTSDB allows you to collect thousands of metrics from tens of thousands of hosts and applications, at a high rate (every few seconds). OpenTSDB will never delete or downsample data and can easily store hundreds of billions of data points. OpenTSDB is free software and is available under both LGPLv2.1+ and GPLv3+. Find more about OpenTSDB at http://opentsdb.net.
Support
Support
Quality
Quality
Security
Security
License
License
Reuse
Reuse

kandi has reviewed opentsdb and discovered the below as its top functions. This is intended to give you an instant insight into opentsdb implemented functionality, and help decide if they suit your requirements.

What does it mean when the tag value returned in an opentsdb query response is "node"?

I'd like to use my custom JSON transformation that implements the com.bazaarvoice.jolt.Transform interface.

I use "Custom Transformation Class Name" and "Custom Module Directory" like this: 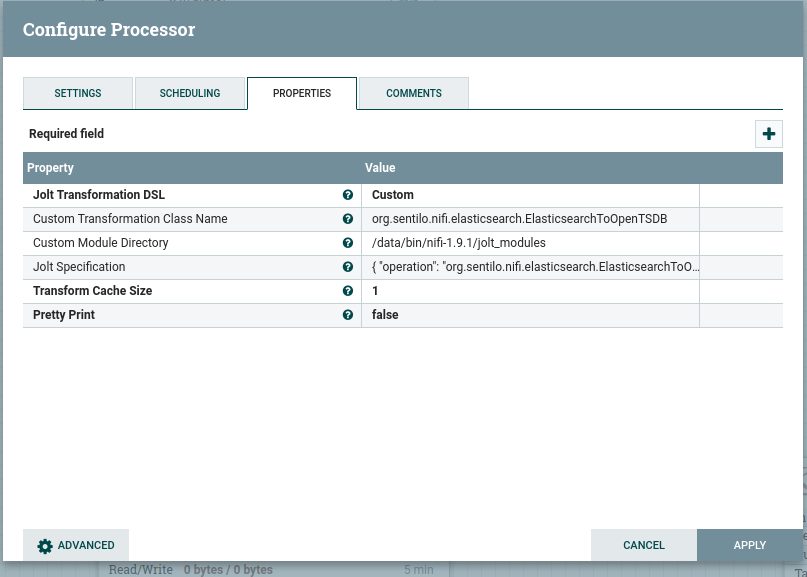 However, I cannot get the JoltTransformJSON processor to use it; I get a ClassNotFoundException:

I compiled the class together with all its dependencies with the maven-assembly-plugin and placed it in the directory "/data/bin/nifi-1.9.1/jolt_modules". The directory and the jar are readable.

I also have tried to add the classname to the operation in spec as in here), but Ii seems that it's the "Custom Module Directory" that does no effect for some reason...

EDIT: I complete the answer with the code of ElasticsearchToOpenTSDB, in case somebody finds it useful. Is just converts Sentilo messages stored in Elasticsearch to OpenTSDB datapoints, flattening some nested JSON structures on the way.

As indicated in the comments, the issue is not resolved yet and has been filed as a bug report. The latest status can be seen here: https://issues.apache.org/jira/browse/NIFI-6213

The problem is not resolved yet and has been filed as a bug report. The latest status can be seen here:

I am trying to apply the deployment.yaml file to my Kubernetes cluster with the command:
kubectl apply -f .\deployment.yaml
but I get this error:
error: error parsing .\deployment.yaml: error converting YAML to JSON: yaml: line 27: could not find expected ':'

The yaml file is the exact same with the original one at github:

So according to the error message,the line 27:

is missing a : , which according to what I see it is there. Why do I get this error?

Not sure why you are trying to apply simple helm's deployment.yaml(that is skeleton for Values.yaml file)

In order to install it correctly I suggest you follow the latest InfluxDB documentation and install with Helm from stable/influxdb repo.

A friend asked me how to store raw video, frame by frame, in HBase. The typical access pattern would be to retrieve frames for a block of time. Each frame is approx. 7MB and the footage is captured at about 30 frames-per-second. A 20-minute video, for example, would take about 250GB of storage.

I saw an excellent video by Lars George, author of HBase: the definitive guide, titled HBase Schema Design: things you need to know, where he talks about storing video "chunks" (the snippet where he's talking about video starts at 1:07:12 and ends at 1:08:52), so it's seems like HBase could, potentially, be a fit for this use-case.

I created a couple of row-key options:

Does anyone have any recommendations or insights for the best rowkey design for video frames?

Note: I know of a couple of similar examples that, instead of using HBase to store the video footage, use sequence files or .har files with separate indexes to capture metadata to allow random access. For now, I'd like to focus on HBase: specifically the rowkey design.

I like you approach but I would suggest to use (videoID % number_of_regions) + videoID + timestamp. This way you are not restricted to 1 min limit, but reads are consequtive and whole video is stored in same region.

I am trying to convert the following ConfigMap yaml file (link here) into a kubernetes_config_map but am running into syntax errors when trying to define it.

In particular, I can't get around the dot notation inside the opentsdb.conf file

This is my current attempt that is erroring out on the "opentsdb.conf"

Welcome file Welcome file As was already mentioned by ydaetskcoR, you should fix your Terraform syntax and add quotations.

Here is a link to Configuration Syntax in Terraform.

A block has a type (resource in this example). Each block type defines how many labels must follow the type keyword. The resource block type expects two labels, which are aws_instance and example in the example above. A particular block type may have any number of required labels, or it may require none as with the nested network_interface block type.

How To Convert CSV File to OpenTSDB Format

Is there currently a way out there to convert CSV files to the OpenTSDB format? It was suggested to me to write a custom Java program to do this conversion, but I'm not really sure where to start there. Any help would be appreciated.

First, I would create a class that can read from that CSV, you can use OpenCSV library, you can find information all around the internet regarding that library. And after that extract what you need (if you have to - I am not sure if you only want simply just convert or to parse the file and get info from inside the file.) And then you have to know your OpenTSDB format and do the magic you have to do. Your question is a bit too general, can you be more specific? You have the link with the OpenTSDB documentation here.

Hopefully I have helped you a bit.

In which case should I use System.in.close()?

when I am reading the code of opentsdb:

After searching this question on the Internet, I can't find a suitable answer. I don't understand why they write system.in.close(), and I want to know if we don't add this code block, what will happen?

We need to store and read exact counter data (integers) over many years basically just with time filtering. Historical imports into the database will be necessary as well and the data is available in fixed time windows (every minute / hour).

It seems that Prometheus, for instance, is not a good fit because they don't ensure 100% accuracy. There are so many listings and comparisons but this is often not even mentioned although it is definitely an important detail.

So the question is: which modern database would be a good fit for such data?

The amount of possible TS databases seems to be endless. Would one or more of InfluxDB, Druid, Riak TS, graphite, OpenTSDB or timely be suitable? Or maybe some other candidate?

It looks like you need some ACID-compliant database. For example TimescaleDB.

I am trying to set up OpenTSDB on Bigtable, following this guide: https://cloud.google.com/solutions/opentsdb-cloud-platform

Now I was trying to open the opentsdb-write service with a LoadBalancer (type). Seems to work well, too.

I am then using insomnia to send a POST to the ./api/put endpoint - and I get a 204 as expected (also, using the ?details shows no errors, neither does the ?sync) (see http://opentsdb.net/docs/build/html/api_http/put.html)

When querying the data (GET on ./api/query), I don't see the data (same effect in grafana). Also, I do not see any data added in the tsdb table in bigtable.

My conclusion: no data is written to Bigtable, although tsd is returning 204.

Interesting fact: the metric is created (I can see it in Bigtable (cbt read tsdb-uid) and also the autocomplete in the opentsdb-ui (and grafana) pick the metric up right away. But no data.

When I use the Heapster-Example as in the tutorial, it all works.

And the interesting part (to me):

NOTE: It happened a few times, with massive delay or after stoping/restarting the kubernetes cluster, that the data appeared. Suddenly. I could not reproduce as of now.

I must be missing something really simple.

Note: I don't see any errors in the logs (stackdriver) and UI (opentsdb UI), neither bigtable, nor Kubernetes, nor anything I can think of.

Note: the configs I am using are as linked in the tutorial.

and if I add ?details, it indicates success:

My guess is that this relates to the opentsdb flush frequency. When a tsdb cluster is shutdown, there's an automatic flush. I'm not 100% sure, but I think that the tsd.storage.flush_interval configuration manages that process.

You can reach the team that maintains the libraries via the google-cloud-bigtable-discuss group, which you can get to from the Cloud Bigtable support page for more nuanced discussions.

As an FYI, we (Google) are actively updating the https://cloud.google.com/solutions/opentsdb-cloud-platform to the latest versions of OpenTSDB and AsyncBigtable which should improve performance at high volumes.

What does it mean when the tag value returned in an opentsdb query response is "node"?

This is relevant to Opentsdb 2.3.1 writing to Google Cloud BigTable (the Opentsdb config can be found here).

where wid and vid are just integers (surrounded by quotes).

Now when I run a simple query with no aggregation, i.e.

Why are tag values for wid and vid = "node"?

There are 2 reasons this was happening:

I removed the following line from our config and the issue went away:

I'm having troubles starting OpenTSDB because no JDK is found allthough I've installed it and set JAVA_HOME. Here's what I've done:

Each time I get the error "* no JDK found - please set JAVA_HOME". I've tried numerous times, what am I doing wrong?

Do you try with these command after install jdk?

with this command select default JDK for the system.

You can download it from GitHub, Maven.
You can use opentsdb like any standard Java library. Please include the the jar files in your classpath. You can also use any IDE and you can run and debug the opentsdb component as you would do with any other Java program. Best practice is to use a build tool that supports dependency management such as Maven or Gradle. For Maven installation, please refer maven.apache.org. For Gradle installation, please refer gradle.org .