pentaho-kettle is a Java library typically used in Migration, Data Migration, Spark applications. pentaho-kettle has no bugs, it has no vulnerabilities, it has build file available, it has a Permissive License and it has medium support. You can download it from GitHub.
Pentaho Data Integration ( ETL ) a.k.a Kettle.
Support
Support
Quality
Quality
Security
Security
License
License
Reuse
Reuse

kandi has reviewed pentaho-kettle and discovered the below as its top functions. This is intended to give you an instant insight into pentaho-kettle implemented functionality, and help decide if they suit your requirements.

How to use FXCanvas with SWT Java 8

How to use FXCanvas with SWT Java 8

I am trying to integrate JavaFX inside of an SWT application using FXCanvas. For reference, I am following this oracle guide

Within my IDE this chunk of code displays an error

(yes, I have imported the correct Point class: org.eclipse.swt.graphics.Point):

However, I don't think this is the root cause... Because when I try to build the project (maven) I get this error:

package javafx.embed.swt does not exist. Which I believe is the true issue.

So after doing some research I have checked a few things, firstly, the jfxswt jar looks like it should be accessible: 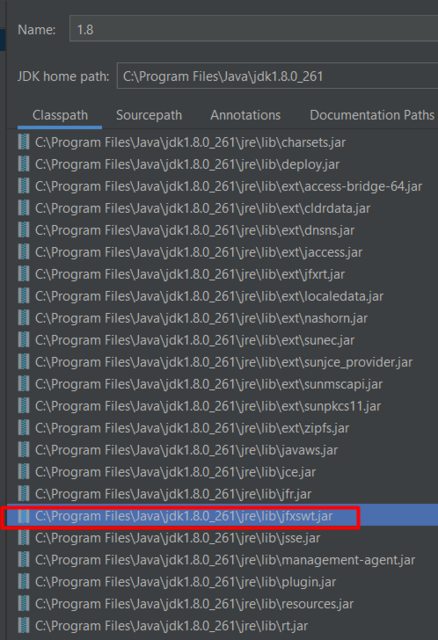 and if I open the JAR, you can see FXCanvas is there:

I even tried adding the JAR manually as a library to my module, still doesn't work.

I will also mention that I have tried this in a fresh project without any maven dependencies, and just adding swt and such as libraries manually with the same error.

Am I missing something, any ideas?

You will need to add the jfxswt.jar file to your classpath for compile and for execution.

This can be done by using the system scope as that jar file is part of your JDK under the jre/lib directory.

This will instruct maven to add the jre/lib/jfxswt.jar to the classpath. This could cause an issue if someone uses different JDK what has that jar in other places but for Java 8 you should be okay.

You have to add the jfxswt.jar to your classpath when you execute your application.

In maven you can use the exec plugin:

The system scope is deprecated in maven in favor of installing files to repositories. The solution above works fine at the moment.

The content of the jfxswt.jar can be part of some SWT libraries unfortunately I am not familiar with SWT. If you can find that jar in a Maven repo than just include that instead of messing with the system scope.

The twobuttons.TwoButtons class is from the tutorial you mentioned.

Use of the Pentaho checkstyle format (via mvn checkstyle:check and reviewing the report) and developing working Unit Tests helps to ensure that pull requests for bugs and improvements are processed quickly. When writing unit tests, you have at your disposal a couple of ClassRules that can be used to maintain a healthy test environment. Use RestorePDIEnvironment and RestorePDIEngineEnvironment for core and engine tests respectively.