SmarterStreaming is a Java library typically used in Media, Media Player applications. SmarterStreaming has no bugs, it has no vulnerabilities and it has medium support. However SmarterStreaming build file is not available. You can download it from GitHub.
业内为数不多致力于极致体验的超强全自研跨平台(windows/android/iOS)流媒体内核，通过模块化自由组合，支持实时RTMP推流、RTSP推流、RTMP播放器、RTSP播放器、录像、多路流媒体转发、音视频导播、动态视频合成、音频混音、直播互动、内置轻量级RTSP服务等，比快更快，业界真正靠谱的超低延迟直播SDK(1秒内，低延迟模式下200~400ms)。
Support
Support
Quality
Quality
Security
Security
License
License
Reuse
Reuse

kandi has reviewed SmarterStreaming and discovered the below as its top functions. This is intended to give you an instant insight into SmarterStreaming implemented functionality, and help decide if they suit your requirements.

Javafx MediaPlayer runs into error whenever you disconnect bluetooth headphones

I have a highschool capstone where I must create a music player which plays music. However, whenever I connect my bluetooth headphones(airpods or musicozy) and then disconnect them, the MediaPlayer halts and an error is produced. I've searched on the internet for an answer but am unable to find one. If someone could help me that would be great! I'm using Javafx 17.0.2 and JDK 11.

Here's a mini reproducible example below.

How to recreate bug

The problem with your recovery is that you are seeking too soon. The docs for seek state that it does nothing while the media player is stopped, but you aren't waiting for the state to change after calling play().

I am making a new react app which have multiple music cards on same page. I want to change the state of previous card before updating the state of new card. In short I want to pause previous audio before playing new one.

The above one is my playing card component.

The above GIF is the working app. In which when I play the second Audio it starts it before stopping the old when. MY background is from android development in which we have only one object of media player and we can manage this using that object. But here i found no solution may be we can do it by accessing the other component state in an other component or may be using a hook etc.

Make a handler for it:

Pass this handler as a prop:

now you just need to call this prop on play button click.

I have developed a music player app in kotlin language. At present when I start another app's song, my app's song is also playing. both songs are playing simultaneously. I would like to add a functionality where the song should stop automatically when another app's media (audio/video) starts playing. How to add this functionality. What concept is behind it? Any hint or suggestion would be appreciated. thanks

You can take a look at this Documentation, https://developer.android.com/guide/topics/media-apps/audio-focus#audio-focus-change. where you will be given the option to add listener in the AudioFocusRequest Builder to listen to Audio Focus Event and add your callback there. alternatively ExoPlayer Library gives you the option to handle Audio Focus automatically on setAudioAttributes method on its Player implementation

Unable to delete .mp3 file due to javaFx MediaPlayer

I am working on my Hhighschool capstone. It is a program where the user can download songs from the internet and store them in an organized manner and play them. My program must contain a feature where the user may delete a specified .mp3 file by simply pressing a button. I have tried the .dispose() method on the MediaPlayer, and then trying to delete the file which doesn't seem to be working. It creates an error saying that the .mp3 file is still being used. How would I stop Javafx from accessing the file? I have searched online for answers but none of them have answers which fit my needs. If anyone could provide me with some code to fix my problem that would be greatly appreciated! Here's a Mini Reproducible Example below!

Thank you to @Slaw for providing a solution to my problem. To solve my issue, I created a deletionQueue ArrayList which would hold the paths to the files I would like to delete. Once .dispose() is used on the MediaPlayer, after a certain amount of time has passed, those files would be automatically deleted.

I have a issue, not being able to import MediaPlayer in my JavaFX project. I am using IntelliJ with a Maven build, JDK 17 .. I updated the Maven dependencies and I have the JavaFX plugin installed, and it is still not working.. Thanks in advance for any answer/suggestion

aswell as the VM arguments I added for the build/run

If you define a module-info.java file and you want to use the javafx.media module, you need to require that module in your module-info (as suggested by kleopatra in comments).

The JavaFX modules are named in the javadoc.

Oracle provide a brief introduction to the module system, which you should understand when you use it.

As you are using Maven and JavaFX 17.0.0.1, you also need a dependency in Maven on that version of the javafx-media module.

For a full discussion of this topic, see:

How do I make a media player control notification in Gtk?

In Rhythmbox (GNOME's music player), when it's playing music, you can open the notifications panel and control the music playback from there. Here's a screenshot. The playback controls are bordered in orange; they have a little music note icon: 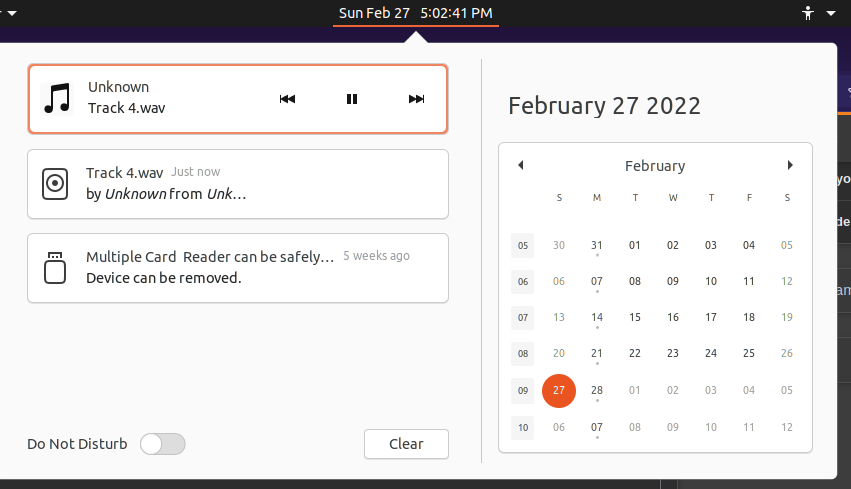 Thanks to the help of BobMorane, I've now figured out that Rhythmbox uses libnotify for its player controls. I know how to create actions using Notify.Notification, and I can make them have images, etc., but what I still haven't figured out is how to:

Using Python's help() function to look at gi.repository.Notify.Notification, the only methods I see that seem to have potential are add_action() (particularly its user_data parameter) and set_hint() (and its variants). Could these be used to achieve my goal?

How do I make a media-control "notification" in Gtk with Python, as explained above?

I think the technology used by Rhytmbox to acheive this is MPRIS (Media Player Remote Interfacing Specification). As they say on their we page:

It provides a mechanism for discovery, querying and basic playback control of compliant media players, as well as a tracklist interface which is used to add context to the active media item.

In Rhythmbox, this is implemented as a core plug-in. The code is pretty complicated, but basically implements the MPRIS specification. This implementation then exposes some information and controls out to other applications which want to control the Rhythmbox, like the Gnome Shell in your case. If you deactivate the MPRIS plug-in, the "notification player" will no longer work.

In GNOME Shell, you can see they have their own MPRIS module as well (https://gitlab.gnome.org/GNOME/gnome-shell/-/blob/main/js/ui/mpris.js), which is used to:

In this module, the formatting of the buttons and all that stuff comes into life as well. This means that on your part (the player's designer), you should have no UI formatting to do (you don't have control over this, GNOME Shell has). What you need to do is expose what is needed by the GNOME Shell by implementing the MPRIS interfaces.

(As a side note: the calendar.js file is the one implementing the notification list, and you can see it uses MPRIS "notifications", which it puts on top of standard notifications.)

There exist Python libraries to do so, such as Mopidy-MPRIS, bit their support for the GNOME Shell seems not to be working at the moment. You may have to look for D-Bus related libraries on FreeDesktop.org. There exists many bindings, with some in Python.

I hope this points you in the right direction.

I have a java project where I have to make a music player that plays either wav or mp3 files. However I can't get my wav or mp3 files to play using the Javafx libraries or with native java libraries. I've checked and made sure the wav and mp3 files I'm using to test aren't corrupted. I'm using Javafx 17.0.2 and JDK 11.

So after this didn't work, I tried it with native Java libraries.

Link to the Wav file I used to text. https://drive.google.com/file/d/1k7a93pZIGY65sGs8BrFMDgeRrgYc0C5k/view?usp=sharing

I could not reproduce your issue.

Your issue is environmental, exactly what it is I could not say.

I advise creating a new project in idea and following the same steps I did and it should work as long as you have the file path correct.

These are the steps I followed to get allow the media to play with your sample app:

Both the MP3 and WAV files played without problem.

Your lie in april is nice, I will try to learn it.

Is it possible to create a browser based html/javascript audio player, that handles most of the MPRIS commands?

I am trying to create a music player, that can handle most of the MPRIS commands.

I want to implement the same behavior in a React.js application, but first I'm looking for a html/javascript based solution.

One of my guesses that this is impossible (without using a browser add-on), because firefox implements this manually for each supported website.

Maybe I did something wrong, but no matter what I search for I couldn't find any information about this.

Thanks for reading / commenting!

This event listener runs every time $ playerctl -p firefox.instance{id} next is run (or when any other MPRIS client calls 'next', like KDE connect on android):

It even works in chrome (except the skipad event). More information can be found on the MDN Web Docs 'Media Session API' page I linked above.

How to play audio continuously in xamarin forms

I implemented audio implementation and added looping property also. But the audio Plays a two times only and after that audio doesn't play. Here I attached a code I implemented. Kindly help how to fix. Thanks for advance

And in iOS the audio play a only one second. It's doesn't play the audio file entirely

You need a hook way to implement a loopMediaPlayer, that is creating a new player when the audio is finished.

Due to ARC , probably AVAudioPlayer is released after calling dependency service , to solved it you can try to make _player as global variable .

I'm creating a media player using Godot. The application is already able to play .mp3 files by using the open with option in the file explorer. The name of the project is "Media player" and the executable is called "Media Player.exe" yet when presented in the open with menu it is displayed as "Godot Engine".

So my question: Is it possible to change this? If so, how?

Note: The option is only visible after first opening a .mp3 file by manually navigating to the executable. The .mp3 file is thus not opened with the Godot game engine but by an application made with it.

Here is an example. 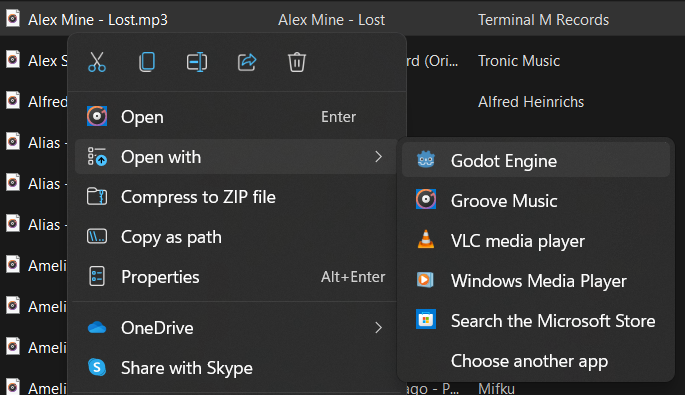 By editing the .exe file using resourcehacker you can adjust the file description and icon. By editing the product name will give the correct name.

Thanks to cybereality from the Godot forum to enlighten me on this solution. 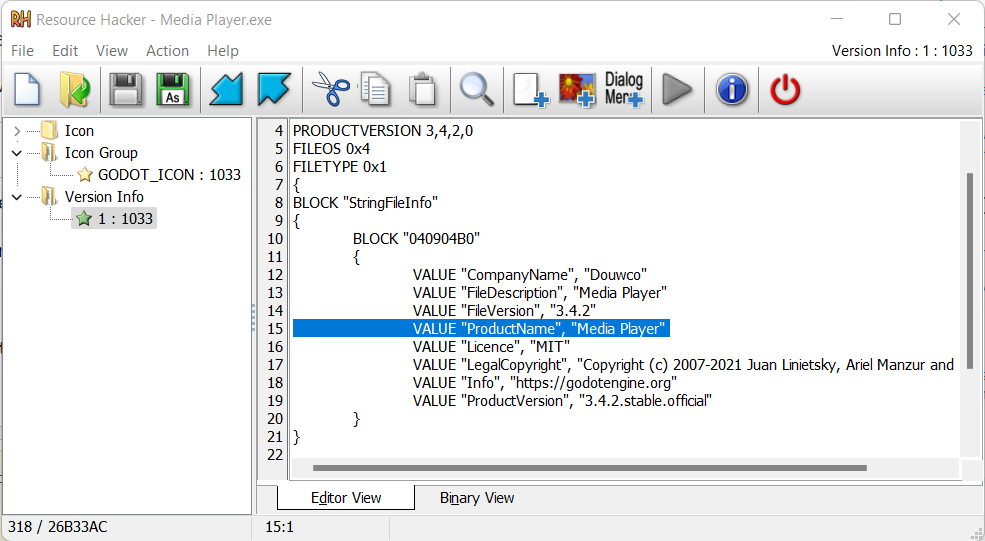 You can download it from GitHub.
You can use SmarterStreaming like any standard Java library. Please include the the jar files in your classpath. You can also use any IDE and you can run and debug the SmarterStreaming component as you would do with any other Java program. Best practice is to use a build tool that supports dependency management such as Maven or Gradle. For Maven installation, please refer maven.apache.org. For Gradle installation, please refer gradle.org .