FirebaseUI-Android is a Java library typically used in Security, Authentication, Firebase applications. FirebaseUI-Android has no bugs, it has no vulnerabilities, it has build file available, it has a Permissive License and it has medium support. You can download it from GitHub, Maven.
FirebaseUI is an open-source library for Android that allows you to quickly connect common UI elements to Firebase APIs. A compatible FirebaseUI client is also available for iOS.
Support
Support
Quality
Quality
Security
Security
License
License
Reuse
Reuse

kandi has reviewed FirebaseUI-Android and discovered the below as its top functions. This is intended to give you an instant insight into FirebaseUI-Android implemented functionality, and help decide if they suit your requirements.

A failure occurred while executing org.jetbrains.kotlin.gradle.internal.KaptExecution - Firebase UI with Glide

Using FirestoreRecyclerAdapter but cannot query any data from Firebase

I am just starting to use Android Studio.

I have followed the steps through in the Studio. I chose "Basic Activity". The app loads, but there's nothing but empty directories there and it has no activity folder or anything to edit the layout with.

I checked it in the Windows explorer, and it just looks the same as in Android studio.

I've also re-tried creating the project at least 5 times, but I've had no success.

Edit: Someone told me I should just create a new activity. Being an absolute new person, I didn't know how to do that, so I looked at this post. However, the post tells me that I need to go into the "New" menu, but I don't see "Activity" in here like the post asserted it would be. 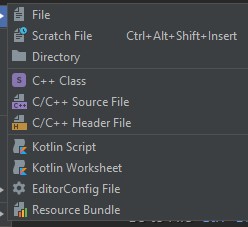 In the following menu click the arrow and select "Project" (is better): 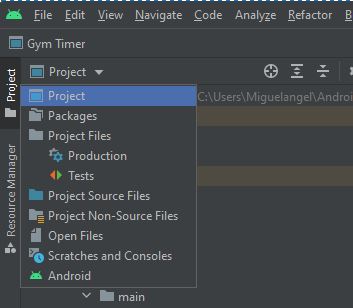 How does resConfigs work in android (gradle)?

Lack of proper documentation on gradle method resConfigs made me ask this question.

If I specify something in front of resConfigs, only that gets included in the final build, everything else does not get bundled into the apk.

The test app has

Note: I used android studios' apk analyzer to deduce the following results. before every test, full clean, rebuild, and prod build was generated with proguard(shrink) enabled.

Test 2: I specified only drawables resConfigs="xxhdpi"

here are a few things to keep in mind

When you provide a resource qualifier to resConfigs then all other resources for qualifiers in that bucket will be removed. Resources in other buckets are not affected .

Please refer to the following link for all the available grouping/buckets . https://developer.android.com/guide/topics/resources/providing-resources#AlternativeResources

A failure occurred while executing org.jetbrains.kotlin.gradle.internal.KaptExecution - Firebase UI with Glide

I'm trying to implement Firebase UI with Glide, I followed the guides here and here, and I got this strange error: 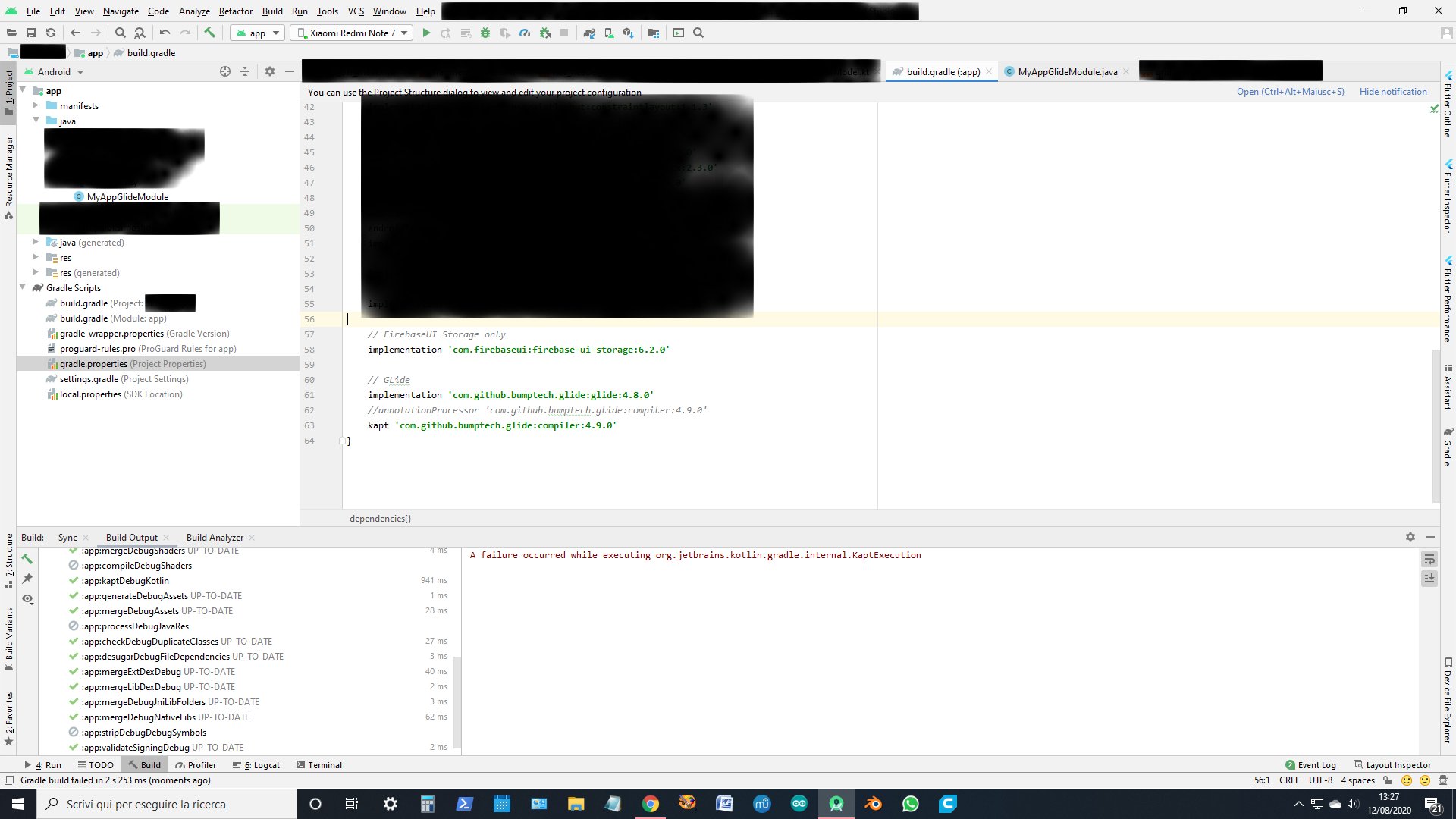 Then, Android Studio suggest something:

So I run with --stacktrace and this is the result:

Problems started when I tried to add Glide to my project, in fact the GlideApp class isn't generated, so I can't use it.

This is my MyAppGlideModule class, as written in the guide quoted above:

I already tried this solution and clean project, Invalidate/Restart tricks.

Solved, updating the Glide version did the trick (gradle didn't notice me, but the site from the official guide said the last version was 4.11.0).

I choose either one of the Sign In options and a custom Chrome tab opens with the provider's authentication flow. After successfully signing in using the provider, the authentication screen is re-displayed, with a dark overlay. Pressing once dismisses the dark overlay. The top-left close button must also be pressed in order to return to my app onActivityResult is then called and sign in completes successfully

I would like to eliminate the need to dismiss the dark overlay and press the close button.

This happens with both the Microsoft auth flow and the Apple auth flow.

Here's demonstration of the behaviour: https://giphy.com/gifs/iEuTTe8ud85EpsXCpH/fullscreen

Make sure you are not using android:taskAffinity, all of the activities should either have the same taskAffinity set or don't set it at all otherwise your activities can be grouped in ways you did not intend them to and can result in behaviors like you mentioned. For more information on how taskAffinity affects your activities, please have a look at this link.

I know this is a discussed topic, but here I am, after all other solutions I've found did not solve my problem. I saved multiple images in Firebase Storage and now I want to get one of them and put it into an ImageView on an AlertDialog (or another Activity).

I've read about Glide solution, but it doesn't work for me. Gilde:

Dependencies for Glide (I've tried with multiple versions and 4.8.0 is the only one that doesn't give me Build error):

The second version I've tried is this one (found in another question here):

But every time it goes on the Failure listener. Therefore, my imageView always remains empty.

In my logcat I observed this error:

But the image is there, in the Storage, and the reference points directly to it:

What am I missing?

EDIT: Using the suggestion in the coments, I tried with:

but this time I get the error:

I'm not sure what's going wrong in your second snippet, but in the first snippet you seem to be passing a StorageReference to Glide. Since Glide doesn't know anything about Firebase Storage, that won't work.

Instead, you should get a download URL from Firebase Storage, which is a regular HTTPS URL that provides public access to the data, and pass that to Glide to render in the view.

Using Firebase UI for sign-in and sign-up, how do I remove the option for a user to sign-up with a first & last name? In other words, only their email and password are required.

According to this github issue, the feature to do so has been implemented. 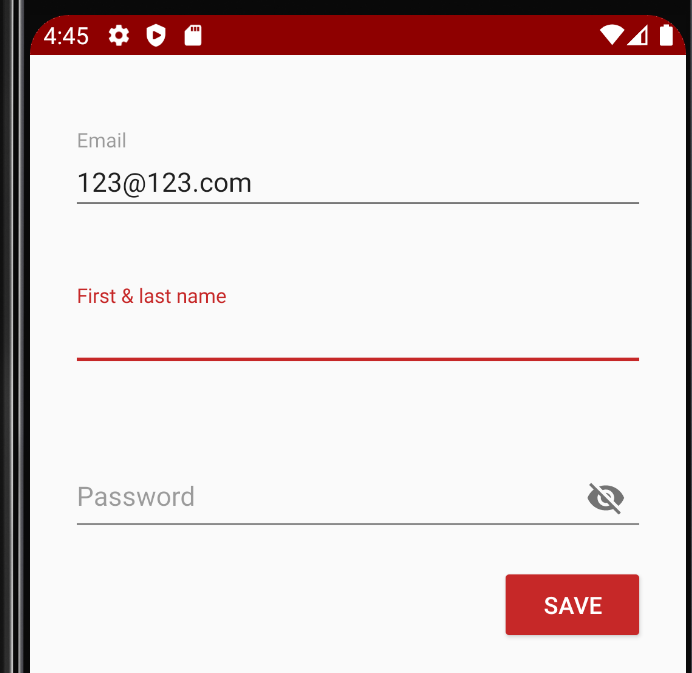 The pull request that implements this feature suggests that you call setRequireName(false) on your EmailBuilder object.

I have read about this issue in multiple places such as here but do not know what user experience to give users.

I'm using Firebase Auth on iOS (Swift). In my app, there are only 2 ways for users to create an account:

I'm not sure how to handle this scenario where Apple replaces the email provider in Firebase:

If you try to create an account with option #1 (Email) again later you'll get this error because it is already used with Apple:

I'm not sure what to do here for user experience if the user wants to login with email but now can't. Do I tell the user: "Sorry, since you did not verify your email, Apple replaced the email provider as an option and now you have to use Apple to login to your account"? Or is there a better user experience we could provide to user? Is there anyway to easily allow this user to use both email and Apple as a way to login in this specific case?

In that case, you call fetchSignInMethodsForEmail to get the IdPs associated with this email. That will return a list with apple.com provider ID. You inform the user that they need to sign in with Apple to that account.

Going forward they would need to use Apple sign-in. The only way to use both is if you verify the email (via email verification) after they sign up with email/password and before they sign in with Apple. When the account is verified, the Apple credential is merged automatically on sign-in and the password is kept on the account.

Using FirestoreRecyclerAdapter but cannot query any data from Firebase

Base on guideline at https://github.com/firebase/FirebaseUI-Android/tree/master/firestore, I make a list items with FirestoreRecyclerAdapter but I don't know why the couldn't retrieve any data. In fact, the number view items are shown correctly, but the content always null. Anyone can help me. Below is source code:

You data model is not aligned with database structure. Try to update it like below:

Besides this don't forget to sync your project with firebase firestore.

FirebaseUI is published as a collection of libraries separated by the Firebase API they target. Each FirebaseUI library has a transitive dependency on the appropriate Firebase SDK so there is no need to include those separately in your app. In your app/build.gradle file add a dependency on one of the FirebaseUI libraries. If you're including the firebase-ui-auth dependency, there's a little more setup required. After the project is synchronized, we're ready to start using Firebase functionality in our app.

on the latest dev branch.