Meaning of function call inside a struct in c++

I have come across structs that are defined seemingly with function calls inside, in some actual c++ code, that I need help to interpret. For example, in Resource.h from the AOSP, there is the following struct definition

I don't understand this part:

Are these function calls? How can they be part of a struct definition? I found this SO post but am not sure if it is relevant/related.

These lines are just constructors of struct ResourceId:

Indeed, structs can have constructors: Struct Constructor in C++?

There is a Git repository on GitHub called platform_frameworks_base containing part of the Android source code.
I wrote an application that replies on all the .aidl files from that project, so it downloads them all on first start.
Until now I did that by downloading the file Android.bp from the project root, extracting all file paths ending in .aidl from that file and then explicitly downloading them one by one.

For example if I found this file path:

But the download process takes waaaaay to long because the repository contains over a gigabyte of binary files. Even if I just clone the last commit of the branch I care about.

Now my actual question is either:
How can I just download the .aidl files that I actually care about? (Ideally without parsing the HTML of every folder in GitHub.)
Or
How can I download/clone the repository without all the binary files? (probably not possible with git?)

I tried using the GitHub API to recursively go through all directories, but I immediately get an API rate limit exceeded error:

From what I understand all my users would have to create a GitHub account and create an OAUTH secret to raise the limit. That's definitely not an option for me. I want my application to be easy to use.

You could use GitHub API code search endpoint to get the paths, but then use your wget raw.githubusercontent method to download them:

Unfortunately, the GitHub API code search endpoint only searches the default branch (in this case, master), whereas you want the android-10.0.0_r47 tag. There could be files in android-10.0.0_r47 but not in master, and this code won't find and download these.

An alternative solution is to do a very minimal clone of each tag you're interested in, and then use git ls-tree to get the paths of each tag, e.g.,

If this is for own use, I probably wouldn't use either of these methods. I would just clone the entire huge repo once and then work with it locally, e.g.,

I'm trying to disable the default/built in display in AOSP. Is there a default flag i can enable/disable to achieve this?. Note: I am compiling Android 10.

I suspect his is possible because of a comment in /core/java/android/view/Display.java I tried removing the builtin or internal flags in frameworks/base/services/core/java/com/android/server/display/LocalDisplayAdapter.java but that causes DisplayManagerService to throw an exception onBootPhase. Any pointer is appreciated.

Workaround only since i couldn't find the actual place to disable it but this worked. In DisplayManager on the public Display[] getDisplays(String category) method i checked. If there's two displays, then ignore whatever display is not the default display. Terrible temporary workaround but this is my solution. Accepting until someone posts a better soltuion!

How is platform/frameworks/base built? AOSP source

I'm looking at platform/frameworks/base. It looks like it's a lot of things from Android's core. It's mainly in Java: https://github.com/GrapheneOS/platform_frameworks_base/blob/11/Android.mk

When we look into its Android.mk file, the most interesting part is:

I'm trying to understand how and what is built from this repo. It's clear that nothing is being built in this makefile, mostly because java code is built from ART. So, what's happening?

It looks like it unzips file from this: SDK_METADATA_DIR :=$= $(call intermediates-dir-for,PACKAGING,framework-doc-stubs-metadata,,COMMON), but then it does nothing more.

How does this repo ends up being built?

The more interesting targets are defined in the Android.bp file.

There are multiple targets that gets built from that repository, so take a look at the java_library targets with names starting with "framework", and the comments on the framework target to find what you need.

On this Makefile: https://github.com/GrapheneOS/platform_frameworks_base/blob/11/Android.mk I found

I found nothing here: What's the difference between := and = in Makefile? neither on the links provided

From the book thegnumakebook, page 126, The Twilight Zone:

It’s possible to take definitions like $( ) and $(\n) and go much further, defining variables with names like =, # or :

I think, = is just some other variable. Here, $= implies, expanding the variable =.

And := is used for simple assignment (Evaluated only once).

What is the meaning of android:layout_height="?attr/actionBarSize"

I'm trying to understand the line of code in the title. I understood that ? means that the value will be taken from the Theme. But when it with prefix attrs, I understand that it is defined somewhere in the android system. Also I saw that the selected theme in the app is a child of Theme.AppCompat.NoActionBar that doesn't determine a value for actionBarSize:

I also find a theme (with the name Theme) at some GitHub resource that really puts a value to actionBarSize but this Theme doesn't seems to be a parent in any parent chain of the new android api's: Theme.xml

As you've found, the only two attributes that .NoActionBar provides are:

The rest of the attributes are inherited from that style's parent. In the parent style chain for .NoActionBar is Base.V21.Theme.AppCompat.Light, which sets actionBarSize:

In this case, the ?android: prefix means that it comes directly from the Android platform, which sets it to 56dp.

You can see all of this if you look at the quick documentation for your style:

All that aside, what android:layout_height="?attr/actionBarSize" means is that the view should be the same height as the action bar. It doesn't really matter that the final value turns out to be 56dp; the point is that, whatever the value actually is, this view will be that tall.

what are LIBRARY LEAKS in leakcanary?

in leakcanary sometimes i am getting leaks reported as "Library leaks"

A leak found by HeapAnalyzer, where the only path to the leaking object required going through a reference matched by pattern, as provided to a LibraryLeakReferenceMatcher instance. This is a known leak in library code that is beyond your control.

is it really out of my control?

might there be something i did to cause it?

Is there anything i can do to prevent it?

leakcanry sometimes places a link to report this memory leak but i don't see any response, is it something that android normally working on? if so, how such issues normally solved and how to keep track?

if indeed there is nothing i can do to solve or prevent it, is there a way i can ask leakcanary to ignore LIBRARY LEAKS?

That's a great question, and in fact this should be better documented so I created an issue to track that: https://github.com/square/leakcanary/issues/1773

is it really out of my control?

Yes and no. Typically this means the leak isn't caused by a bug in your code or using an API incorrectly, it's caused by a bug in either Android X or the Android SDK. That being said, it's not always out of your controls, there can be tricks / hacks to work around leaks.

might there be something i did to cause it?

The ViewLocationHolder in Android P is an unfortunate bug that happens.. when you use views. So yeah, you didn't really do anything special.

Is there anything i can do to prevent it?

Potentially but no one has come up with a clear hack to work around it yet.

leakcanry sometimes places a link to report this memory leak but i don't see any response, is it something that android normally working on? if so, how such issues normally solved and how to keep track?

Not sure what you mean here. If you mean that the link to the bug report (https://issuetracker.google.com/issues/112792715) stopped working, yes that's because Google decide to prevent access.

if indeed there is nothing i can do to solve or prevent it, is there a way i can ask leakcanary to ignore LIBRARY LEAKS?

There's no way for LeakCanary to know whether a leak is a library leak or not prior to dumping the heap and doing the analysis. It's important to notify developers that the analysis is done (even if it only found a library leak and no app leak) because otherwise they wonder what happened to the analysis.

I stripped the adapter, it only mostly contains FirestoreRecyclerAdapter extension related variables. No static values, no context, no listeners. I have a similar adapter in another activity without any issues.

I also tried to set the adapter of the recycler to null and even the LayoutManager in the onStop. still doesn't help.

It can't be an android leak since other activities are using the same, right?

The answer is in the description of the trace you pasted :)

Description: In Android P, ViewLocationHolder has an mRoot field that is not cleared in its clear() method. Introduced in https://github.com/aosp-mirror/platform_frameworks_base/commit/86b326012813f09d8f1de7d6d26c986a909d Bug report: https://issuetracker.google.com/issues/112792715

This is a known Android bug.

My app is a photo organizer of photos taken with the default camera app. I want it to send photos to "trash", so they can later be restored from trash in the default photos app.

Deleting images fully is shown with an example in the API docs: https://developer.android.com/training/data-storage/shared/media#remove-item , but this deletes the image immediately and doesn't send the image to trash.

It looks like for a brief 1 month period in the beginning of 2019 there was a trash-method on MediaStore, but it was deprecated the month after: https://github.com/aosp-mirror/platform_frameworks_base/blame/2d330f6fa8bc0888a27bf1729844be8b0fe71c8b/core/java/android/provider/MediaStore.java#L843

What API do you use to send a photo taken with the camera app to trash?

Edit: Here's a screenshot to clarify what I mean by "trash". 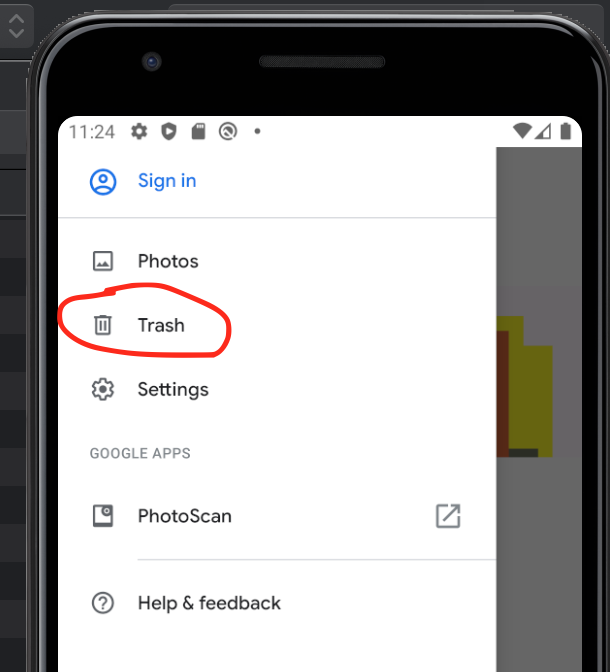 There is no such API. Each app has its own private trash can implementation, you can't interact with it.

After launching the phone authendication via firebase-ui i get the next leak report from leakcanary. I dont think i am doing anything wrong.

This is a LibraryLeak, which means it's a known leak in a library or the Android framework code. At the bottom you can see the pattern:

description: In Android P, ViewLocationHolder has an mRoot field that is not cleared in its clear() method. Introduced in https://github.com/aosp-mirror/platform_frameworks_base/commit/86b326012813f09d8f1de7d6d26c986a909d Bug report: https://issuetracker.google.com/issues/112792715

You can download it from GitHub, GitLab.
You can use platform_frameworks_base like any standard Java library. Please include the the jar files in your classpath. You can also use any IDE and you can run and debug the platform_frameworks_base component as you would do with any other Java program. Best practice is to use a build tool that supports dependency management such as Maven or Gradle. For Maven installation, please refer maven.apache.org. For Gradle installation, please refer gradle.org .