Web-Dev-For-Beginners is a JavaScript library typically used in Institutions, Learning, Education, Tutorial, Learning applications. Web-Dev-For-Beginners has no bugs, it has no vulnerabilities, it has a Permissive License and it has medium support. You can download it from GitHub.
24 Lessons, 12 Weeks, Get Started as a Web Developer
Support
Support
Quality
Quality
Security
Security
License
License
Reuse
Reuse

24 Lessons, 12 Weeks, Get Started as a Web Developer

I have been trying to learn about functional programming, but I still struggle with thinking like a functional programmer. One such hangup is how one would implement index-heavy operations which rely strongly on loops/order-of-execution.

Here, in the prefixList function, the nums list is first cloned, but then there is the iterative operation performed on it, where the value on index i relies on index i-1 (i.e. order of execution is required). Then this value is returned.

What would this look like in a functional language (Haskell, Lisp, etc.)? I have been learning about monads and think they may be relevant here, but my understanding is still not great.

Often one does not need indexing, but enumerating over the list is sufficient. Imperative programming languages often work with for loops with indexes, but in many cases these can be replaced by foreach loops that thus do not take the index into account. In Haskell this also often helps to make algorithms more lazy.

If you really need random access lookups, you can work with data structures such as defined in the array and vector packages.

When I run my model, the console print this info:

Warning: the fonts "Times" and "Times" are not available for the Java logical font "Serif", which may have unexpected appearance or behavior. Re-enable the "Times" font to remove this warning.

We also recently had this issue on a mac running the latest public beta of Monterey.

For some reason the Times font was no longer installed or active on the Mac.

You can check in FontBook 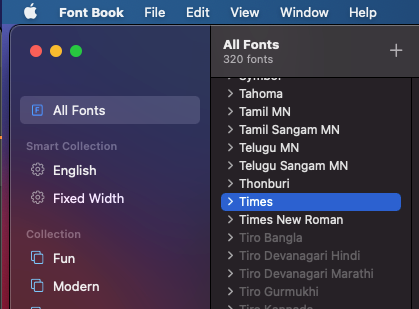 You can simply reinstall it

I struggled to find a source online - her is one suggestion - https://www.freebestfonts.com/timr45w-font

This exact code was working a few months ago but now returning all sorts of errors, very confusing since i havent changed one character of this code. Maybe a package update has changed things?

I fit the sequential model with model.fit, then used model.evaluate to find test accuracy. Now i am attempting to use model.predict_classes to make class predictions (model is a multi-class classifier). Code shown below:

This exact code was working not long ago so struggling a bit, thanks for any help

This function were removed in TensorFlow version 2.6. According to the keras in rstudio reference

Or use TensorFlow 2.5 or later.

If you are using TensorFlow version 2.5, you will receive the following warning:

tensorflow\python\keras\engine\sequential.py:455: UserWarning: model.predict_classes() is deprecated and will be removed after 2021-01-01. Please use instead:* np.argmax(model.predict(x), axis=-1), if your model does multi-class classification (e.g. if it uses a softmax last-layer activation).* (model.predict(x) > 0.5).astype("int32"), if your model does binary classification (e.g. if it uses a sigmoid last-layer activation).

How do I fix CLIENT_MISSING_INTENTS error?

I started learning about discord.js but now I am facing this issue. I tried some googling but couldn't manage to fix it.

This is the error I am getting:

You need to specify the events which you want your bot to receive using gateway intents.

I got this error when learning Next.js, using npx create-next-app command according to site documentation here https://nextjs.org/docs/api-reference/create-next-app. Everything works until I start the server,

I found this solution https://github.com/webpack/webpack/issues/14532

In my case, I'm using Nodejs 17.0.1 version and causing this error.

Firstly I'm using this command export NODE_OPTIONS=--openssl-legacy-provider before any command in GitBash Windows to fix this issue.

But, I think it's not an efficient way, so what I do is :

Vue 3 passing array warning: Extraneous non-props attributes were passed to component but could not be automatically inherited

please, I'm learning a VueJS 3 and I have probably begineer problem. I have warn in browser developer console like this one:

I'm passing array of objects to the child Component. In my parent views/Home.vue compoment I have this implemenation:

Data are in data.js file. The part of file is here:

PS: Application works but I'm afraid about that warning. What can I do please like right way?

I will be glad for any advice. Thank you very much.

The ItemProperties component has multiple root nodes because it renders a list in the root with v-for.

Based on the class name (infobox-item-properties), I think you want the class to be applied to a container element, so a simple solution is to just add that element (e.g., a div) in your component at the root:

TypeError: match.loader.options.plugins is not a function

I am trying to use tailwindCSS in a ReactJS app

These are the scripts commands in package.json file

When I am used npm run start command, I am facing this error

Things that I have tried :

Got this error, when I tried to do that

It looks like the Tailwind configuration from CRACO is not needed anymore.

I have a large dataset (~5 Mio rows) with results from a Machine Learning training. Now I want to check to see if the results hit the "target range" or not. Lets say this range contains all values between -0.25 and +0.25. If it's inside this range, it's a Hit, if it's below Low and on the other side High.

I now would create this three columns Hit, Low, High and calculate for each row which condition applies and put a 1 into this col, the other two would become 0. After that I would group the values and sum them up. But I suspect there must be a better and faster way, such as calculate it directly while grouping. I'm happy for any idea.

You could use cut to define the groups and pivot_table to reshape:

What should the result be when assigning a variable to a reference to itself, in-between modified and then returned by a function call?

I'm currently in the middle of learning about lvalues and rvalues and was experimenting a bit, and made this which seems to be getting conflicting results. https://godbolt.org/z/KqsGz3Toe produces an out put of "5 6", as does Clion and Visual Studio, however https://www.onlinegdb.com/49mUC7x8U produces a result of "6 7"

I would think that because addOne is calling x as a reference, it would explicitly change the value of x to 6 despite being called as an lvalue. What should the correct result be?

Since C++17 the order of evaluation is specified such that the operands of = are evaluated right-to-left and those of << are evaluated left-to-right, matching the associativity of these operators. (But this doesn't apply to all operators, e.g. + and other arithmetic operators.)

first the value of the right-hand side is evaluated, yielding 5. Then the function addOne is called and it doesn't matter what it does with x since it returns a reference to it, to which the right-hand value 5 is assigned.

Formally, evaluating the right-hand side first means that we replace the lvalue x by the (pr)value it holds (lvalue-to-rvalue conversion). Then we call addOne(x) to modify the object that the lvalue x refers to.

So, imagining temporary variables to hold the results of the individual evaluations, the line is equivalent to (except for extra copies introduced by the new variables, which don't matter in the case of int):

So the line is equivalent to (simplified, knowing that operator<< will return std::cout again):

Before C++17, the evaluation order of the two sides of the assignment operator was unsequenced.

Having a scalar modification unsequenced with a value computation on the same scalar (on the right-hand side of your assignment) causes undefined behavior normally.

But since you put the increment of x into a function, an additional rule saying that the execution of a function body is merely indeterminately sequenced with other evaluations in the calling context saves this. It means that the line wont have undefined behavior anymore, but the order in which the evaluations of the two sides of the assignment happen could be either left-first or right-first.

This means we won't know whether x is evaluated first and then addOne(x) or the other way around.

6 would be obtained if the evaluation happened equivalently to

pre-C++17 the same issue applied. The evaluations of the arguments to << were indeterminately sequenced, rather than left-to-right and so addOne(x) could be evaluated before the left-hand x, i.e. in addition to the previous order, the evaluation could also be equivalent to

In this case x is first incremented and then its new value is printed twice.

Therefore possible program output could be either of the following:

(Technically the int t2 = addOne(x) are two evaluations: One call to addOne returning a reference and then the lvalue-to-rvalue conversion. These could happen interleaved with the other evaluations, but this doesn't give any new program outputs.)

Flutter (2.5) - A splash screen was provided to Flutter, but this is deprecated

I am new to flutter and recently tried to develop a test app for learning sake with latest version Flutter 2.5. By looking at some tutorial online, I have added flutter_native_splash: ^1.2.3 package for splash screen. And works fine.

However, when I launch app for the first time, it shows following debug message

W/FlutterActivityAndFragmentDelegate(18569): A splash screen was provided to Flutter, but this is deprecated. See flutter.dev/go/android-splash-migration for migration steps.

After visiting the above link, I am not able to understand much what is supposed to be done.

Also, compileSdkVersion and targetSdkVersion is set to 31 in build.gradle

Please help. Thanks in advance.

Answered 2022-Jan-19 at 05:24
To avoid that warning you just need to remove that API usage from your project. Remove these lines of code from the AndroidManifest.xml file.

Previously, Android Flutter apps would either set io.flutter.embedding.android.SplashScreenDrawable in their application manifest, or implement provideSplashScreen within their Flutter Activity. This would be shown momentarily in between the time after the Android launch screen is shown and when Flutter has drawn the first frame. This is no longer needed and is deprecated – Flutter now automatically keeps the Android launch screen displayed until Flutter has drawn the first frame. Developers should instead remove the usage of these APIs. - source

As per the flutter 2.8.0 update, The newly created project doesn't have this warning.

They removed unused API from Androidmanifest.yml but still have belove mentioned code.

Teachers, we have included some suggestions on how to use this curriculum. We'd love your feedback in our discussion forum!.