cocos2d-x is a C++ library typically used in Gaming, Game Engine applications. cocos2d-x has no bugs, it has no vulnerabilities and it has medium support. You can download it from GitHub.
|Win32|Others| | ----|------| [![Build status](https://ci.appveyor.com/api/projects/status/nlgirox464j6ldg5/branch/v4?svg=true)](![Build Status(https://travis-ci.org/cocos2d/cocos2d-x.svg?branch=v4)](https://travis-ci.org/cocos2d/cocos2d-x). [cocos2d-x][1] is a multi-platform framework for building 2d games, interactive books, demos and other graphical applications. It is based on cocos2d-iphone, but instead of using Objective-C, it uses C++. It works on iOS, Android, macOS, Windows and Linux.
Support
Support
Quality
Quality
Security
Security
License
License
Reuse
Reuse

How to start a new game

Trying to get user input to move sprite in Cocos2D-X

There is no sln file in proj.win32

Trying to get user input to move sprite in Cocos2D-X

I'm trying to make user input of WASD move a sprite around in Cocos2D-X. I'm pretty sure I'm doing everything correct but it gives me this error: expression must be a modifiable lvalue.

There is four of the error and they all point to a different playerX/Y +=/-= 5.0f

Try to use mutable specifier(which allows lambdas body to modify the objects captured by copy, and to call their non-const member functions):

In our game application for Android which is based on the game engine cocos2d-x, with most of the code being written in C++, we have a very strange and critical issue since Android 11:

When the native library gets loaded in onLoadNativeLibraries it now suddenly takes 60+ seconds. Before Android 11, it all worked fine and it loaded in 0.2-3 seconds. Now when you start the game, you have a 60+ seconds gray screen.

We already figured out that JNI_OnLoad gets called directly after the 60 second stall is over.

Here's the code of the onLoadNativeLibraries function:

We already tried time profiling, but without any success. It just hows that it's spending a lot of time on that function. Also pausing via the debugging doesn't lead to any further clues. The native debugger doesn't show anything on the C++ side of the code.

Does anybody have any idea why this is happening or what we could try to figure it out? Any help would be highly appreciated :)

It's a bug in Android 11 fixed by google but not deployed yet.

Meanwhile, if you don't care about calling static and thread_local variables destructors in your lib when program is exiting/library is unloaded, pass the flag -fno-c++-static-destructors to the compiler. (see long answer for a more granular solution using clang annotations)

I used this flag on my project (not cocos2d) with no issue and lib is loading even faster than before.

Unfortunately this is a performance regression introduced in android 11 (R) by the Google team. The issue is being tracked by google here.

To summarize, when System.loadLibrary() is called, the system registers a destructor for each of the C++ global variables contained in the loaded library, using __cxa_atexit()

Since Android 11 (R), the implementation of this function in android has changed:

This change regressed the performance drastically when they are many C++ global variables which seems to be the case in cocos2d so libraries.

Google has already implemented a fix https://android-review.googlesource.com/c/platform/bionic/+/1464716 but as stated in the issue:

this won't be in Android 11 until the March QPR at the earliest, and since this isn't a security issue it won't be mandatory for OEMs to actually take that patch.

Google Team suggests also some workarounds at the app level by removing or skipping the destructors on global variables:

Cocos2d-x v4.0 crashing in all iPhone Simulator. In device no crash

For above line everytime crashing. Not using any shader. Above line called by Sprite creation.

How to fix this crash for simulator ? 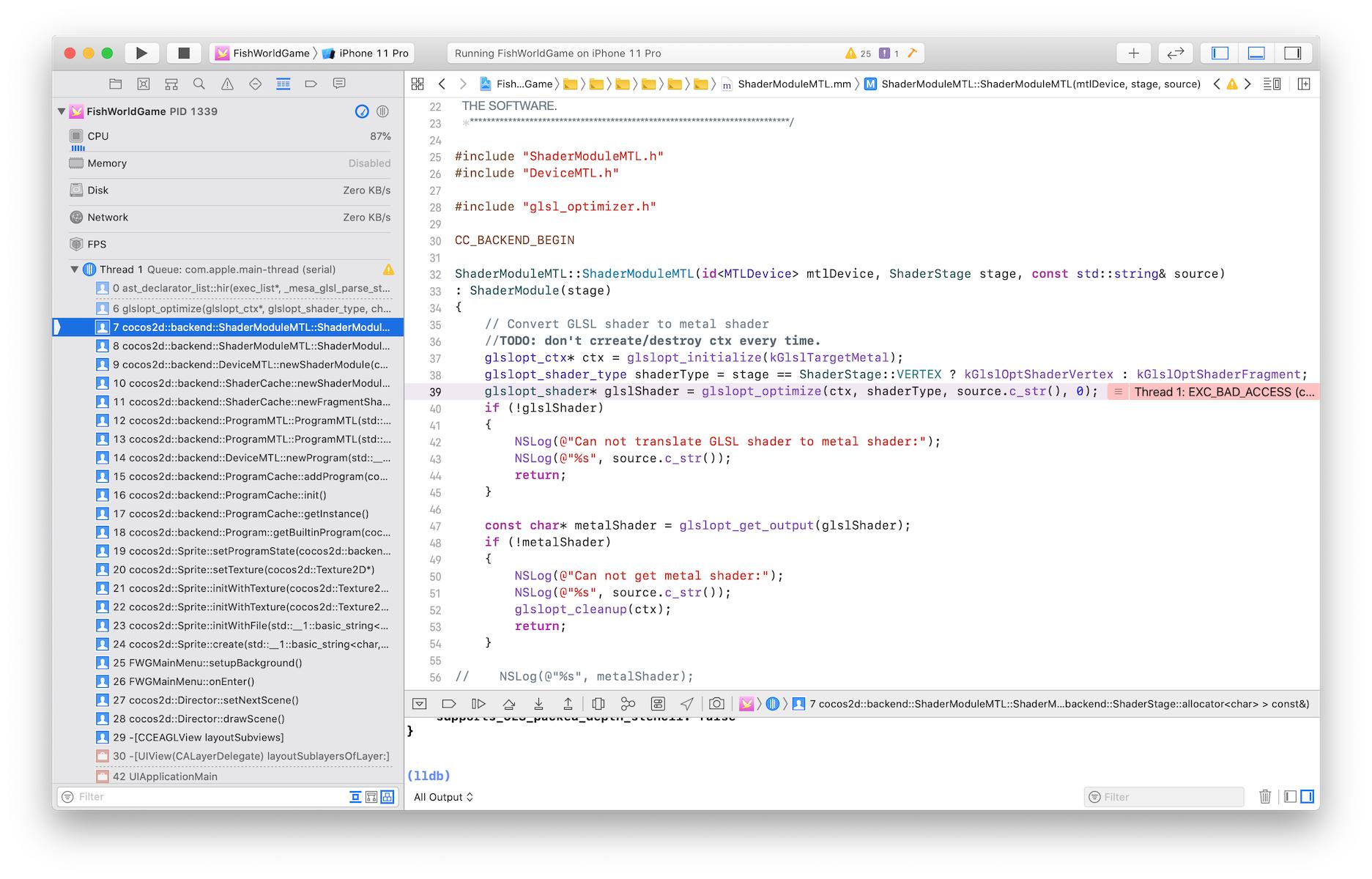 With that little info we can't help much. But if I try to interpret the posted image corretly you receive a "EXC_BAD_ACCESS" Exception.

This means more or less that you access a freed memory region or in general you try dereference a pointer pointing to an invalid memory address.

The only argument which could cause such an error is source.c_str(). So you should check the code path of source.

In release builds you don't see always "access-after-free" because memory is not immediately released to the OS (which triggers such errors) it is just marked as "free" to allow faster allocations.

I cannot confirm whether this has been since a newer iOS version (perhaps 11 onwards) but the hardware volume buttons do not respond whilst using an app I am updating at present. It uses SimpleAudioEngine and whilst I have looked at some other projects I have that use Cocos2d-x, I have tried to use the SimpleAudioEngine source from there, with zero success.

In my HelloWorldScene.cpp I am calling

The music works, but I am unable to control the volume using the hardware keys on the iPhone x or the iPad Pro.

In most of my apps i use the same syntax and it is working using cocos2d-x version 3.17.2.

But only tested on old iPhone SE hardware.

So These 3 are same

(Unity 2019.2) iOS build crashes 5 seconds after the application is killed by the user

The application presents a crash 2~5 seconds after it's terminated by the user (i.e. force kill the app). This happens only on iOS builds on multiple unity versions (see details below). Most of the crashes reports are not arriving on Crashlytics. There are very few crashes on the console, even though we're consistently reproducing this error on a daily basis. The Android builds don't present the same error.

Here's a list of all solution attempts without success so far:

Description: The general problem is to have any piece of code that blocks the Main Thread on iOS when the application is finalizing (see this document for more information). In our case it is happening because of ongoing requests when the player kills the application. As we save the player progress on the server when the application is terminated (using Dispose() method), the request blocked the main thread, causing the crash. The solution is to remove this particular save. We tested a build including this fix and, so far, we have no crashes on 20 attempts of killing the game after the Game Scene is loaded. We haven't thought about this before because this piece of code is there since August of 2019 and it hasn't been touched since then. The problem started to happen only in February of 2020.

More information: Since the piece of problematic code was in the project since August of 2019 and the problem started to happen only on February of 2020, it's possible that the iOS version has something to do with it. We haven't investigate the changelog yet, but the oldest iOS version presenting the crash so far is iOS 13.2, released on October 28th, 2019.

Another possibility is that some change on our backend code caused the request to hang. As we use BestHTTP, by default all requests are aborted when the application is terminated. We haven't investigate if the execution order of Dispose vs. OnDisable/OnApplicationQuit can be the issue. Also, by default, the requests aborted by BestHTTP during Application Quit still call the callbacks. In our case, the callback for that Save Player is null, so this might not be the problem.

Related crashes: We're still facing some crashes on the loading scene. As far as we've seen, they happen when there's a request going on. The reproduction rate of those issues are way lower than the problem on Game Scene.

I'm using cocos2d-x 3.17. When I run a Follow action on a sprite, the tiled map can't render fully. The map looks exactly the same as the screen record shows in posts below

But they were using Cocos Creator and can fix it by setting ENABLE_TILEDMAP_CULLING = false.

Is there any equivalent settings in C++ api?

Found out the root cause is that the Scene has been moved by Follow action. It seems in cocos2d-x, Scene is not supposed to move.

I am trying to load particle effects (in .plist format) in my Cocos2d-x game code, and I am facing the warning: "libpng warning: iCCP: known incorrect sRGB profile", as mentioned in the question. I have done some research on my end, and the other StackOverflow users who asked similar questions had this issue while loading .png files.

However, I am facing the same issue while initializing .plist files instead. Any insight on how to remove this warning would be helpful. Kindly note that I am not facing any issue with loading the .plist file as such, but the warnings are polluting my log streams.

Also, to confirm that this isn't an issue with the .plist file itself, I tried loading the file manually on my UI editor tool, and that seemed to load it without any issues.

I am ready to provide more details on my environment if necessary. I tried doing the above in a blank project as well, and I was able to reproduce the same warning.

To fix this warning, I created a fresh variable/system, and assigned a parent to it, while setting the position of the new variable to that of a well-known (desired position) node.

There is no sln file in proj.win32

I just installed cocos2d-x and created a new project using this command line : cocos new ProjectName -l cpp. It created with no errors but when i check proj.win32 folder, there was no .sln file. How can I open up this project? Or why there is no sln file?

You did it correctly. There is no .sln file just from creating a new project.

Since you want .sln file, it means you want to use an IDE. As noted in https://github.com/cocos2d/cocos2d-x#using-ide, cmake is required in order to use IDE.

If you don't have cmake installed, download it from https://cmake.org/download/

After you have it installed, go to the proj.win32:

Then, run the following command:

The .sln file should be created.